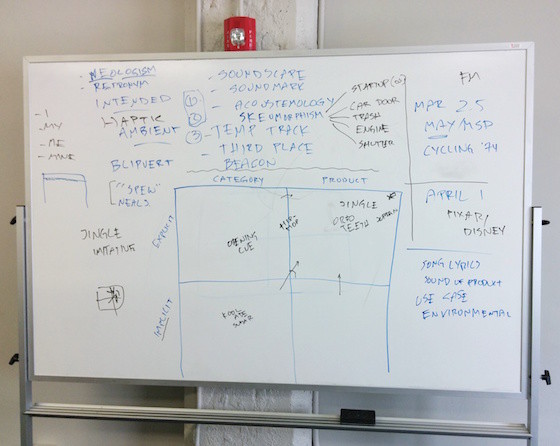 On the very first day of class I share this sequence:

That is, in a handful or so of words, a map of the 15-week course that I teach on the role of sound in the media landscape at the Academy of Art in San Francisco.

The first semester I taught the course, back in 2012, a student raised a hand from the back of the room and asked, in effect, if I am making up any of the words we use. I suppose hearing “anechoic” and “acoustemology,” among other less esoteric terms, over and over takes its toll, and I replied that I did not make up any of the words. I did, however, take responsibility for two familiar words used in a particular context. Those words, and that context, are the subject of week 7.

First some background on the course, in case this is the first week you’ve read one of these summaries: Each week of the 15-week course my plan is to summarize the previous class session here. Please keep in mind that three hours of lecture and discussion is roughly 25,000 words; this summary is just an outline, in this case less than 10 percent of what occurs in class. Some class meetings emphasize more discussion than others. Week 7 this semester is especially discussion-heavy, and hence the lecture outline here is fairly cursory.

I start off week 7 by reviewing recent vocabulary. When this goes well, we don’t stop with the words I initially reprise, words like “soundscape” and “soundmark,” and, yes, “anechoic” and “acoustemology.” We discuss how the first two develop out of the work of R. Murray Schafer, how the third relates to John Cage, and how the fourth comes out of the work of Steven Feld. To revisit the previous week’s class meeting, on the role of sound in retail space, we discuss Ray Oldenburg’s concept of the “Third Place.” In turn, student queries lead to additional vocabulary refreshes, among them sonic equivalents of so-called “skeuomorphism” design (the shutter sound of digital cameras serves as a good example), “haptic” feedback, and the difference between a “neologism” and a “retronym.”

Then we proceed to those two fairly common terms I mentioned up above, “explicit” and “implicit,” which we employ in a specific context. For the purposes of discussion, an “explicit” sound related to a subject is one closely tied, in the public imagination, to it, such as the “pop pop, fizz fizz” of Alka-Seltzer, or the anthropomorphized Snap, Crackle, and Pop of Rice Krispies. In contrast, “implicit” sounds are those that are to some extent inherent in a given subject, but that are not fully, for lack of a more nuanced term, branded. Different makes of door lock, for example, will sound different upon close inspection, but it would be hard to make a case that to anyone other than a discerning thief those sounds are closely associated with the locks.

We begin by drawing a grid, two by two, and we put those two words on the Y axis. On the X axis, horizontally, we write “category” and “product.” The remainder of week 7 involves working through how sounds can be oriented in those four quadrants. This plays out in various ways, largely as a result of group discussion, and thus it doesn’t translate particularly well to summary. So, I’ll just emphasize some things I’ve learned when teaching this class:

Homework: The homework for week 8 is to take another pass on the research from week 7, which involved the development of a “sonic audit.” This week in class we take time, in small groups, to compare notes about how to apply the explicit/implicit grids to the students’ chosen topics, which range from Oreo cookies to Nike sneakers to Rolex watches. The assignment is as follows: Do a “sonic audit”of a specific brand/product of your choosing.

Next week: The software tools of sound, with an emphasis on Audacity and, just to nudge things a little, Max/MSP.

This first appeared in the March 24, 2015, edition of the free Disquiet “This Week in Sound”email newsletter: tinyletter.com/disquiet.