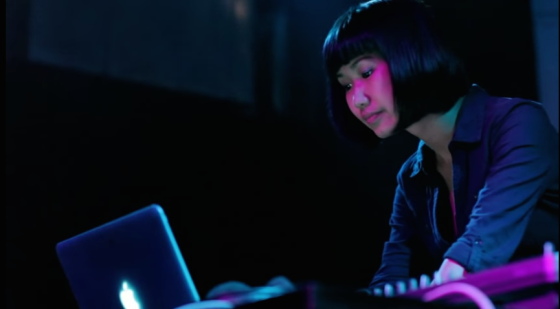 “Musick to Play in the Dark” is a mini-suite of shifting elements, from Vietnamese singing to antic percussion. It is by Luong Hue Trinh, a Vietnamese national who studied in Japan and has traveled widely. Opening with high-tension strings before the singing kicks in, it slowly becomes a majestic, maximalist work, heavy on hypnotically rhythmic percussion. The beat, heard as if from inside an old alarm clock, has a back and forth sway that creates intricate patterning, especially as it is set against distant pounding and sonic effects.

There’s also video of her performing an excerpt of the piece at the Onion Cellar in Hanoi, making it clear she’s working largely on a laptop from prerecorded field recordings and sampled music:

Track originally posted at soundcloud.com/huetrinhluong. Trinh is one of the nearly four dozen women represented on the Synthesis Vol. 1 compilation of international women doing work in sound, released in 2014 by the Urban Arts Berlin. She posts occasionally on her Facebook page. Follow the Onion Cellar at theonioncellar.tumblr.com and facebook.com/theonioncellar.