Aphex Twin uploaded a fresh batch of new old tracks to his user18081971 SoundCloud account this past week or so, about 20 in all. The activity followed a three-month break. As of this writing, there are 249 items in the account. The flurry coincided with the commercial release of Orphaned Deejay Selek 2006-08, under his AFX moniker. He has become quite adept at using free archival music as a means to increase attention to the work he actually puts up for sale. As “experimental” as his commercial music can be, many of the free tracks are more straightforward in their experimentation. That is to say, they are not merely “experimental,” but also “experiments”: they appear to be test runs of equipment and very rough initial sketches of ideas. Many among the recent batch are modular synthesizer experiments, enough of them that he took the time to collate them in a playlist that currently has 11 parts over the course of half an hour. One highlight is the droning mechanics of “Lecce – Voltage Controlled Acoustic Resonators,” which indeed sounds like the industrial noise of a very large machine. The source of the material is, characteristic for ever-ambiguous Aphex Twin, unclear. The track includes a three-word liner note: “custom helmholtz resonators,” and down below in the comments he has a back and forth with someone who suggests it was an actual refrigerator he recorded back in 2011 while he was touring Italy: 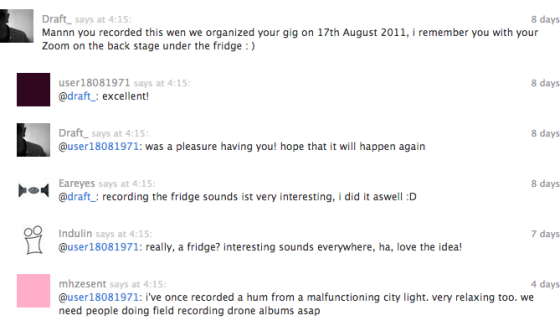 And here’s a video of that Italy performance, at a far more frenetic pace than the archival audio:

The track is certainly deeply ambient, whether that ambient is the figurative effort of him in the studio, or the practical matter of everyday background noise framed in a four and a half minute field recording. In either case, I’ve added it to my Selected Ambient Works 3 (beta) playlist, which now numbers 11 pieces and a playing time of nearly an hour.