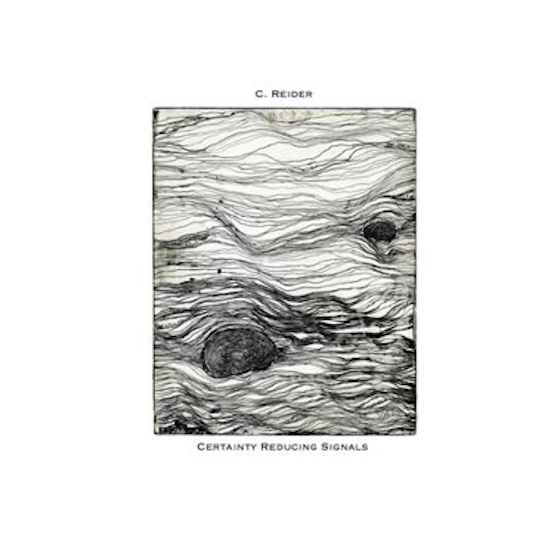 Certainty Reducing Signals is the title of a 10-track set that C. Reider released back on July 13, aka Netlabel Day. That’s the day when we celebrate the phenomenon of small record labels that actively distribute their music for free, often — though perhaps not as often as one might want — with the intention that listeners subsequently rework the music themselves. Reider is a longtime proponent of experimental music and creative re-use. And true to form, the record’s liner notes include details on what went into it. (Full disclosure: Three of the tracks originated in the Disquiet Junto series of weekly projects, and I’m thanked in the notes.)

One highlight is “Dirigible,” a rusty, wired, dense thicket of noises that has a delightfully slow internal pulse. Starting out as a Junto project, it employs as source material Marsh and May’s album Falling More Slowly, from the Linear Obsessional netlabel.

Another favorite is a “site recording” titled “Vaporizing Rain,” a mix of rattling and white noise, likely the title substance hitting a metal roof. The result, two minutes in length, is a thoroughly engaging generative rhythm. True to the generative paradox, it is never quite the same twice, yet consistent throughout.

(The audio was autoplaying, and in advance of me sorting out how to turn off the autoplay, please proceed to freemusicarchive.org to listen.)

The album was released by Happy Puppy Records and is available at freemusicarchive.org. More from Reider at vuzhmusic.com, twitter.com/vuzhmusic, c-reider.bandcamp.com, and soundcloud.com/vuzhmusic.