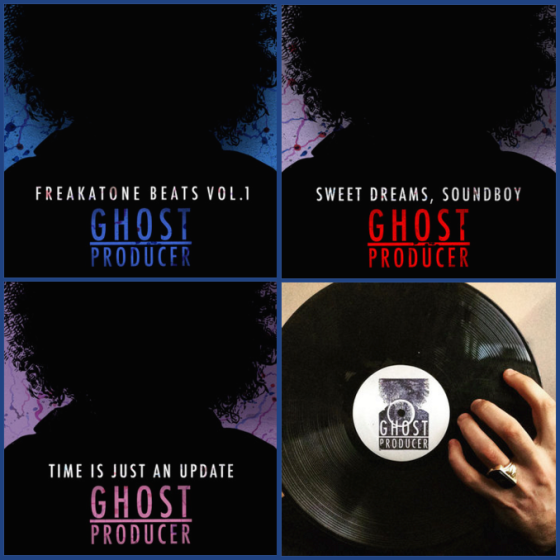 Raz Mesinai has been busily filling out his ghostproducer.bandcamp.com account. On the 11th of the month he posted Freakatone Beats Vol. 1, a collection of broken white noise disguised as funk, 15 tracks that come with their own unique “parameters,” a mix of practical and theoretical constraints. This is Freakatone‘s “Nervous System”:

And these are the freakatone parameters — a beatcraft Oulipo, a downtempo Dogme 95, a drone Fluxus:

The day prior to Freakatone Beats Vol. 1 came Sweet Dreams, Soundboy, a beatless collection of 16 industrial-ambient swaths, some harrowing, others lilting, all serrated. Here is the fourth in the otherwise title-less sequence, one of the set’s relatively lighter pieces, which to say the fear is at the far end of the dark corridor, rather than right in your face:

Especially welcome is the four-part String Quartet for Four Turntables, a Lincoln Center Festival commission in which the “quartet” was in fact four separate parts (two violins, one viola, one cello — the classic quartet format) recorded to vinyl and manipulated by two DJs. Here is part two — check it out around 5:50 when the scraping violin is made to imitate a passing police siren. The collection was posted on October 16:

It was first performed by Dj Olive and Dj Toshio Kajiwara at the Lincoln Center Festival in New York City in 2000 but was never recorded or released until now. Mesinai insisted on letting the vinyl sit, uncovered, for 15 years, so that the crackles and pops would be more present.

It dates from 2000, when it was performed alongside work by the X-Ecutioners, as well as a quartet consisting of DJ A. Vee, DJ Frankie, Kuttin’ Kandi, and Christian Marclay playing versions of John Cage’s “Imaginary Landscape No. 5.” I mentioned it here back in 2009. And I interviewed Mesinai back in 2006.

And then there’s the far more expansive and varied Time Is Just an Update, also from October 11, 13 tracks that include attenuated drones, hauntingly sublimated orchestrations, and extremely slow chamber music. This is a track, “Tag Hash,” seemingly made almost entirely from vinyl crackles, repeated and echoed into a dubby matrix:

The music is streaming for free, and available for purchase: $9.99 for Sweet Dreams, SoundBoy (there’s also a $35 “endless cassette” version), $4 for the String Quartet (there’s also a limited-edition $200 vinyl edition), $7 for Time Is Just an Update, and $5 for Freaktone.

Mesinai, a prolific experimental turntablist based in New York City, is at ghostproducer.bandcamp.com and twitter.com/razmesinai.