A KQED interview with Mahmoud Hashemi about Listen to Wikipedia 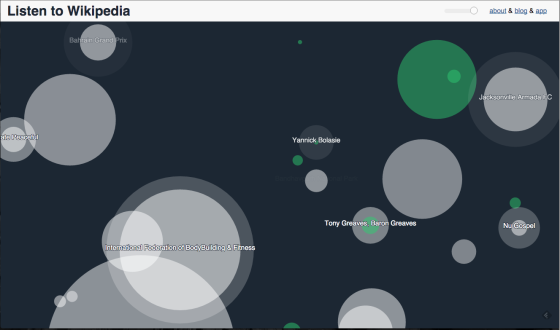 Someone adds an entry about a cooking magazine from the 1950s? Boom …

Someone corrects the release date in the discography of James Taylor? Bleep …

Someone undoes a spelling correction in an entry about an undersecretary from a mid-century U.S. presidential administration? Bong …

Audible tones and expanding, colored circles are used in tandem to announce changes to the vast collaborative encyclopedia thanks to the great online tool Listen to Wikipedia (listen.hatnote.com), one of the best examples of realtime sonification on the web. Developed by Stephen LaPorte and Mahmoud Hashemi, it’s the subject of a short recent interview from radio station KQED. The conversation with Hashemi goes into the background of the tool. He talks about the software’s actions, and how it serves both as an expression of Wikipedia and as a response to the economic focus of Silicon Valley.

There’s something very pleasing and centering about the placid surveillance of Listen to Wikipedia, all that communal and often rancorous activity transformed into dulcet tones. Sometimes I just let it run on a side screen as I work. Sometimes I also run this pure geographic visualizer, at rcmap.hatnote.com: 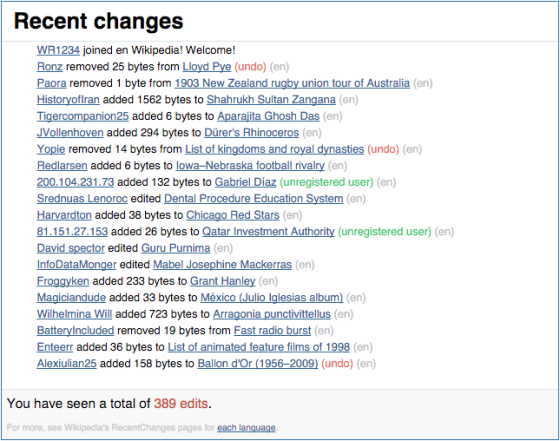 This documentation summarizes how the sounds and related images of Listen to Wikipedia correlate with actual edits:

Bells indicate additions and string plucks indicate subtractions. Pitch changes according to the size of the edit; the larger the edit, the deeper the note. Green circles show edits from unregistered contributors, and purple circles mark edits performed by automated bots.

Here’s a short video of Listen to Wikipedia in action:

Track originally posted at soundcloud.com/kqed. The KQED story was produced by Sam Harnett, of the podcast The World According to Sound (theworldaccordingtosound.org). Check out Listen to Wikipedia at listen.hatnote.com. It’s also available as a free iOS app (itunes.apple.com).