This Week in Sound: The Hum

The Hum: To say that Colin Dickey’s essay in The New Republic on the perception of persistent hums connects existential concern about industrialization with the ineffable trauma of tinnitus would be to understate the historical range of the study, which moves from the “aeolian sound” reported by an 1828 traveler in the Pyrenees to contemporary Facebook support groups. And it’s thick with interviews, including one with Glen MacPherson, a teacher who founded the World Hum Map and Database Project. Writes Dickey at one point, “As I listened to MacPherson’s story of a mysterious noise, I couldn’t help but notice a sign tacked to the wall behind him, written in the big, gentle hand of a kindergarten teacher: ‘Be kind, be safe, be listening.’”(Via Drew Daniel and Dominic Pettman.) For further reading, I suggest the work on aelectrosonics by Douglas Kahn, as well as field recordist Gordon Hempton’s depiction of electric-grid hums as “the American mantra.”

Ne Plus Ultra: And in tangential news, “New research from the University of Southampton indicates that the public are being exposed, without their knowledge, to airborne ultrasound” (sonicstudies.org).

Warning Warning: Photo by itinerant (sound) artist Jeff Kolar near Stinson Beach, in Marin County, during a visit from Chicago. It’s a visual warning sign in advance of a sonic warning: 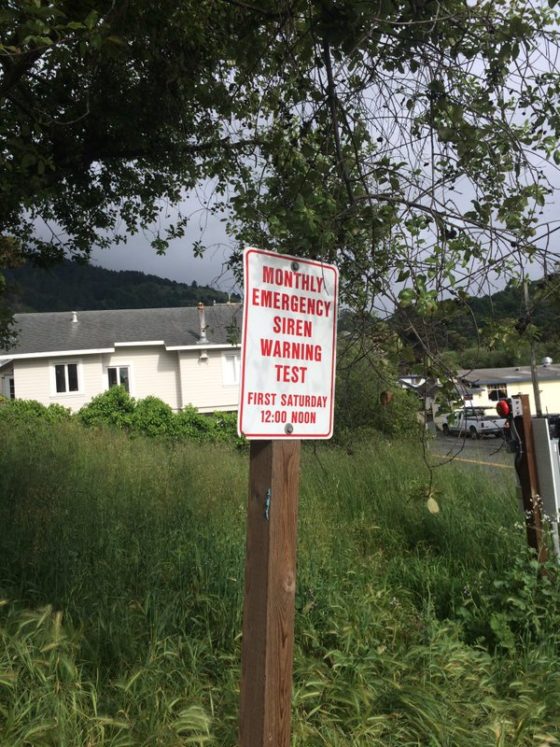 This first appeared, in slightly different form, in the April 12, 2016 (it went out a day late), edition of the free Disquiet “This Week in Sound”email newsletter: tinyletter.com/disquiet.