The patterns are where the match is made.

Andreas Gursky’s large-scale photos are rich with repetition. In his current show at the Gagosian gallery in Manhattan there’s a shot from an Amazon warehouse that looks like the Ellis Island of books. It has a clear interest in microscopic detail, commercial markets, and patterns that takes on a rhythmic sensation, much like his earlier photos of rainbow-colored candy shops, and ornate hotels, and massive apartment complex facades.

Richie Hawtin’s music is among the most minimal of technos. Under his own name, as well as under the Plastikman mantel, he pushes white noise and reverb, pin-prick beats and limited palettes, until they submerge the listener in an anxiously monochromatic aesthetic realm. And yet he never is far from the dance floor.

Gursky may have less interest in soft focus and muted colors than Hawtin, but they both embrace and intermingle hardened minimalism and commercial intrigue in their work. Thus it’s a welcome surprise that the musician has created an installation score for that Gagosian exhibit, titled Not Abstract II, which opens on November 10 and will run through December 23. The team-up got a brief mention in today’s New York Times, following earlier mentions on dancingastronaut.com and thump.vice.com that noted precedents, like Hawtin’s live Guggenheim show in 2013 and a 2012 participation in an Anish Kapoor installation at the Grand Palais in Paris.

Gagosian has posted over eight minutes of the score at its website, gagosian.com, and better yet it’s set to repeat. It’s little more than a dense ambient room tone serving as backdrop to slow, martial pounding, like the workings of a robotic factory floor documented in all its inhuman glory. A brief note mentions the connection between Gursky and Hawtin: “His unique hypnotic sound echoes Gursky’s exploration of the formal questions of abstraction through scale distortion and rhythmic repetition of motifs.

The combination brings to mind a recent scenario at the de Young Museum here in San Francisco, where a massive wall long inhabited by an op-art piece by Gerhard Richter made way for a video installation by Carsten Nicolai, aka electronic musician Alva Noto, who one evening took over the interior plaza and played a short concert. The connections between Richter and Noto were self-evident but where at the de Young it was a serial handing of the baton, at the Gagosian the patterning is simultaneous, layered, coincident. 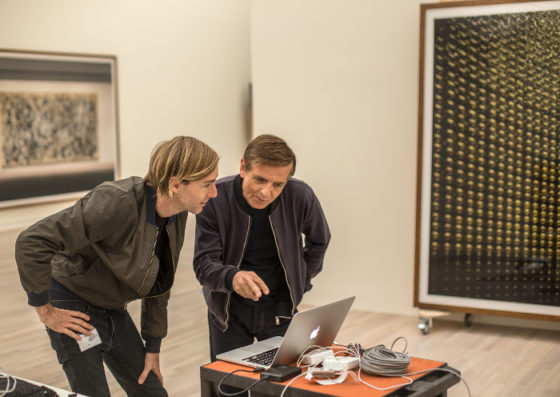 From July 2 until today, November 6, there was an exhibit Not Abstract at Kunstsammlung Nordrhein-Westfalen Düsseldorf, where the above photo by Johannes Kraemer was shot (that’s Hawtin on the left, Gursky on the right), which also had a Hawtin score (see kunstsammlung.de). What isn’t clear is if the Gagosian music is a sequel or a repetition.

Less than a year after the Guggenheim exhibit there was a seven-track record put out by Hawtin of the performance. Perhaps the Gursky sounds will also be released.