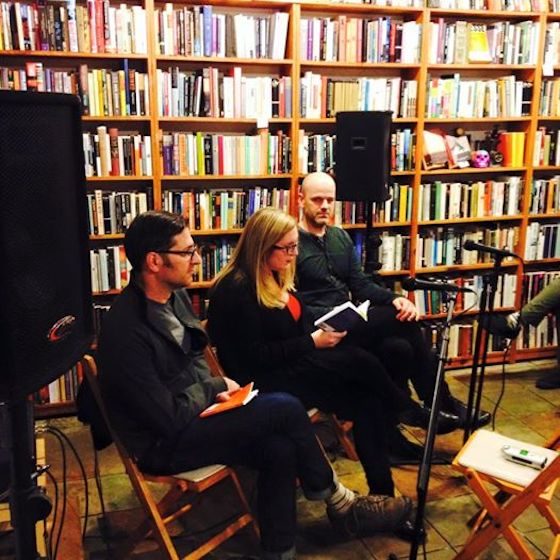 I had a great time last night yapping with Evie Nagy about our respective 33 1/3 books at Adobe Books in San Francisco under the informed guidance of the gracious Marc Kate. When Evie talked about Devo’s Freedom of Choice, I was instantly transported back to my friend Evan Cooper’s basement, circa high school. I was gonna read the part about Gracenote and cultural metadata from my book about Aphex Twin’s Selected Ambient Works Volume II, but it’s a little long at six pages, so instead I played “White Blur 1” and read the bit about that track from the first chapter of the book. It was especially timely, what with Brian Eno having come out of the woodwork earlier this week to reaffirm the definition of ambient, in his mind, to being rooted in generative processes, which is what the wind chime is all about. Thanks to everyone who came out. I met some Twitter avatars in the flesh for the first time, saw people I hadn’t seen in ages, intrigued some folks about the weekly Disquiet Junto projects, responded to audience questions about stuff like the changing nature of canonical albums and the role of description in music criticism, mentioned the upcoming Futuredraft talk I’m giving on December 1 about doorbells, and had phenomenal al pastor tacos and habanero salsa down the block from Adobe at Taqueria Guadalajara. (That’s me on the left in the photo and Marc Kate on the right.)

There were good questions last night, both from the host, Marc Kate, and from the audience. I thought I’d summarize and elaborate some of them here:

Q: What does the change in music-listening habits mean in terms of how works are defined as canonical? A: To me, the decline in the concept of a cultural canon is an overall positive, not just a net positive. Individual works are less likely to be singled out as hulking achievements, forced to bear weight that they can’t support without consensual hallucination and received idolatry. In the place of that canon we have not only a much broader sense of cultural output, but we also look less at individual works and artists/bands, and more at scenes and communities and time periods. That’s a much more realistic and holistic way to appreciate culture.

Q: Used to be you couldn’t hear everything released, and record reviews filled that void, let you know what to expect. What role does description play in music criticism today, in the age of streaming? A: I think the most important role of description hasn’t changed — it’s less about describing how the music sounds, and more about describing how the music works, what to listen for.