Charting a path through eight hours of music (updated August 30)

Even in our age of distracted listening and an overabundance of inbound music, among so much other readily available culture, an eight-hour box set is a thing apart. You don’t listen, not in the traditional sense of listening, to something like Autechre’s recent NTS Sessions 1-4 releases, comprising eight hours of music over four sets — not so much as you immerse yourself in them. The music may sound fully and purposefully artificial in its distraught scifi effluences, but the experience is no less environmental in its encompassing qualities. It may be proudly unnatural, but that doesn’t mean it isn’t vibrant and alive.

As it turns out, in our age of 360-degree, 24/7 culture, the most singular sonic object may be something that itself aspires to filling our senses past their periphery. This is why NTS Sessions is best appreciated alongside other recent cultural monoliths, like Stephan Mathieu’s Radiance (764 minutes over 12 CDs), Brian Eno’s Music for Installations (6 CDs), and such Important Records collections as the Harry Bertoia Sonambient omnibus (11 CDs), as well as performance corollaries like Max Richter’s night-long Sleep concerts (also available as a box set with 8 CDs and a bonus Blu-ray disc) and the “endless” generative music iOS apps of Peter Chilvers. Fight fire with fire, and overload with overload.

It’s worth noting that all these works, including the Autechre box, are abstract. They are slippery forms of sonic culture, lacking easily identifiable form. Even in brief excerpts, the music evades recollection. Extended over hours, they are in some ways only knowable while they are playing. Hit pause, or stop, and they tend to evaporate.

NTS Sessions isn’t even Autechre’s first monolith. The box is an hour longer than the AE_LIVE series that Autechre uploaded back in 2015, and twice the length of the 2016 elseq series. When elseq came out, I tried to wrestle with it. I started a “listening diary,” but only managed two detailed reflections before getting hooked on a single track, “TBM2,” which I listened to for days and then weeks. I only recently stumbled on words I’d written about “TBM2” (it felt a bit like finding discarded field notes in Jeff VanderMeer’s Southern Reach novels). Today, while listening to NTS Sessions, I tidied up those scribbles and belatedly appended my “TBM2” thoughts to the elseq diary.

Now I’m giving the listening diary another run, this time focused on Autechre’s most recent monolith, which is likely not their last. The following document is a work-in-progress, charting my path through and around NTS Sessions 1-4. And while it slowly accumulates, if you’re interested here’s my 1997 interview with the duo: “More Songs About Buildings.”

Track:1:1 “t1a1” (18:39) [2018.08.27] The album begins like there is a bombing raid in progress, a full minute of overhead onslaught, muffled a bit by thin walls before the rubbery percussion and droid chatter come to formulate a rhythm. The thing chugs along at barely 70bpm. That pace and the track’s length, nearly 19 minutes, signals we’re in, as listeners, for an extended haul. Reserve your energy. The track provides the long and the short: expansive by contemporary electronic music standards, a drop in the ocean by those of this four-session collection. [2018.08.28] Something stalks the dance floor. Whatever is pummeling the world above at the track’s opening has a presence down below, too. The beat in this subterranean space is the slow heavy pacing of a massive machine on tactical duty. The more melodic elements here, wisps of signals, flutterings of data arrays, are information being shared, all heavily encoded but bearing a glimmer of intelligibility: the machines mock us weak human-types by chattering freely in our presence. It’s the singspiel of our robot overlords, all the more tragic because we find it beautiful. This is the score to a Doom movie bearing a District 9 mod, under the direction of Alex Garland.

Track:1:2 “bqbqbq” (11:15) [2018.08.27] There was a moment, somewhere around the album Confield (2001), maybe as early as LP5 (1998), where for me Autechre went from swamp murk to dry, high land. Whatever boggy fumes had filled the voids in their earlier work gave way to a pristine, brittle present. That’s when my listening to them began to decline. This track, “bqbqbq,” captures that hyperdigital nature, and renders it as something almost light, a bit of melody repeated over and over, slowly adjusted. Where the opening track was an assault, this one is a respite, albeit an 11-minute respite. (When it comes to monolith music, all things are relative.) If the first track on NTS Sessions suggested the destination is way over the horizon, this one makes the journey seem doable. [2018.08.28] It’s striking how cheerful “bqbqbq” sounds after one has endured nearly 20 minutes of “t1a1,” and not just because the title could be misread as “bbq.” It’s all droid babble, the robot beatboxing of cyborg data assistants with the algorithmic capacity of a quantum mainframe and the emotional intelligence of a three-year-old human. Ethan Hein has commented about how people who don’t get rap often don’t get that the nuances in the vocals are as demanding if not more demanding than are the stylings of singers who scurry up and down multiple octaves. The slight variations in the vocaloid scat here are of the same microtonal variety. (Full Hein quote, via twitter.com/ethanhein: “Rap is always melodic. The pitches are usually unquantized but they’re still specific and meaningful. You could argue that rap melodies are more rich than sung melodies for that reason.”)

Track:1:3 “debris_funk” (10:25) [2018.08.29] A lot is made of Autechre’s algorithmic approach to rhythm and composition. The fact is that much of their compositional work is the equivalent of — and I say this as someone with, truly, great affection for Autechre and for the rumblings of clothes dryers — putting something in the dryer and letting it run for a set amount of time. It’s the same object — an old sneaker, say, for illustrative purposes — rotating in space and banging against the drum, and each time around that bounce is slightly different than it was before. Of course, Autechre accomplish this feat at a massive rate and at a nanoscale level of detail in terms of degrees of variation, and they’re pushing sound in myriad directions simultaneously. The dryer is just a metaphor for descriptive purposes. All of which said, “debris_funk” is next level. It has a sense of structure and development the first two tracks of *NTS Sessions 1-4* purposefully lack. The center of “debris_funk” is pure rhythmic variation (Autechre in dryer mode, as it were), but the piece also has a proper opening, not the mere scene-setting sound-design prelude of “t1a1” — instead, it’s something that hints at and morphs into the main rhythm. Then, a minute in, follows the core. And then there is a pause, a drop, as it were, seven minutes into “debris_funk” that is downright orchestral. By 7:10 or so, the drums have faded entirely (the slow fade of those drums is the first thing on this record that sounds like it was done entirely by human hand in real time — and that may not be a compliment); all that is left is this hulking equivalent of a string and horn section, torqued near the breaking point, filtered far beyond its carbon-based tonalities. It’s a neural network’s idea of the score to an excessively bloody and baroque horror film, like an AI got shafted by Thom Yorke for the Suspiria-remake gig, and uploaded its alternate soundtrack as an act of retribution. A full minute later, the drums remain on hiatus. The melody that is playing is the same that earlier wafted above and amid the beats; now its own contortions are fully present, unobscured by rhythm. Soon, two minutes of percussive-free existence have passed, a rarity in Autechreland, and it’s as if all that orchestral might has been slowly funneled into one impossibly dense, digitally manipulated violin. The drums, in fact, never return in “debris_funk.” The track doesn’t close so much as fade right into the next, “l3 ctrl.” This isn’t how the album starts off, with “t1a1” cutting quickly into “bqbqbq” and “bqbqbq” having a proper (if barely several milliseconds) pause before “debris_funk” kicks in. The three parts of “debris_funk” (salvo -> dryer mode -> beatless minutes) feel like segments of a single, coherent piece, but this new shift between tracks, this medley-like transition, has muddied the structural waters. Why is “l3 ctrl” considered separate from “debris_funk,” yet the three parts of “debris_funk” are considered a whole? It may relate to the presumed-live mode of NTS Sessions, how DJs segue between tracks.

Interlude [2018.08.30] The great thing about YouTube isn’t simply how much music is on there, but also how many great live versions and covers and outtakes — and beyond that, user-generated variants, treatments, and reworkings. The more experimental the music, the more introspective and studious the variants can be, notably such now routine efforts as slowed versions and reversed versions. When I corresponded with Ethan Hein about his comments regarding nuance in rap vocals (related to the NTS Sessions 1 track “bqbqbq”), he in turn sent me a link to a YouTube video where someone had slowed the first of the four NTS Sessions sets down to half its original speed, yielding a sonic document over four hours and forty minutes long. It’s a little odd that someone takes the time to do this, since YouTube will do it for you: Click on the gear symbol at the bottom of a given video, and a little window pops up, offering options from quarter speed to double the original speed: 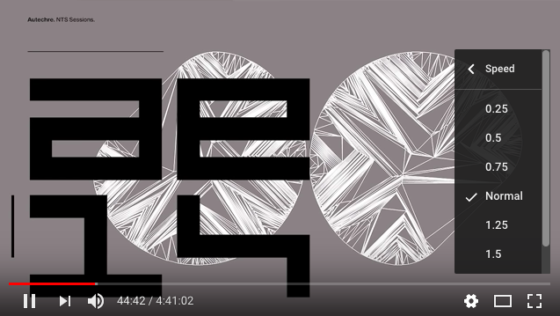 (If you watch modular-patching or guitar-fingering videos, this can be more effective than the pause button to see what’s actually happening.) If audio artifacts are your thing, you can play the half speed NTS Sessions video back at double speed, yielding the audio at its original speed, though arguably — combined with the fidelity inherent in streaming — also muffled, digitally masticated, along the way. One YouTube commenter replied to the video, “Slowing down ae is exploded view ae. so many details that seemingly went by me when listening in normal speed are presented here in broad daylight.” And that’s very much the case. I’d add one qualifier. Because the music is slowed down, the repetition of the core rhythms on each track becomes less apparent. You really do lose sight of the structure, and in the process the detailed micro-alterations that are the hallmark of these tracks become less, rather than more, self-evident, because you don’t hear them in context, you don’t hear them as the transitions occur. Still, if you have a favorite moment, find the time code, multiply it by two, and listen in “exploded view.”

Note: This document is a work in progress. To be updated regularly for the foreseeable future.