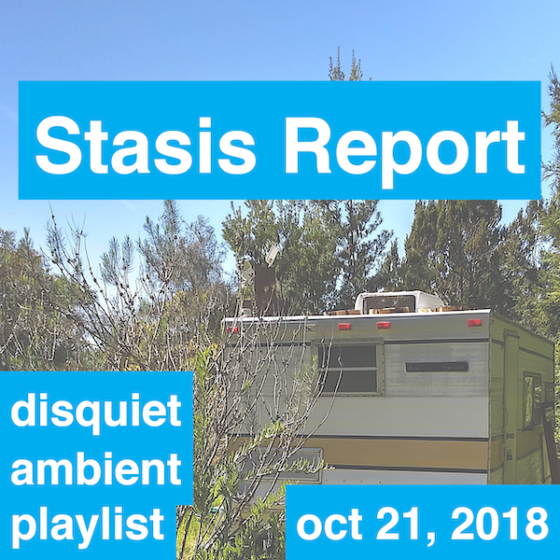 The latest update to my Stasis Report ambient-music playlist on Spotify and Google Play Music. The following five tracks were added on Sunday, October 21. All are from 2018, four of the five from this month. No room for a classic track this week — too much new music coming out as the end of 2018 approaches.

✚ “Mono No Aware 1.4” from William Basinski and Lawrence English off Selva Oscura. It was released by the Temporary Residence label on October 12, 2018: williambasinski.bandcamp.com.

✚ “A Parallel Array of Horses,” the title track off the new album by Geneva Skeen. It was released by the Room40 label on October 19, 2018: room40.bandcamp.com.

✚ “Jordan Beckons,” off the new album Valet to Iowa by Carey Moore. It was self-released on October 11, 2018: careymoore.bandcamp.com.

✚ “At Dawn” by Lea Bertucci off Metal Aether, released back on February 9, 2018, by the NNA Tapes label: leabertucci.bandcamp.com

Some previous Stasis Report tracks were removed to make room for these, keeping the playlist length to roughly two hours. Those retired tracks — from Eashwarashwar Subramanian, Laura Karpman, Less Bells, Field Works (with Loscil), Suss, ioflow, and Aphex Twin — are now in the Stasis Archives playlist (currently only on Spotify).