Three new tracks, one recent, and one classic added to the Spotify and Google Play Music playlist as of October 28, 2018 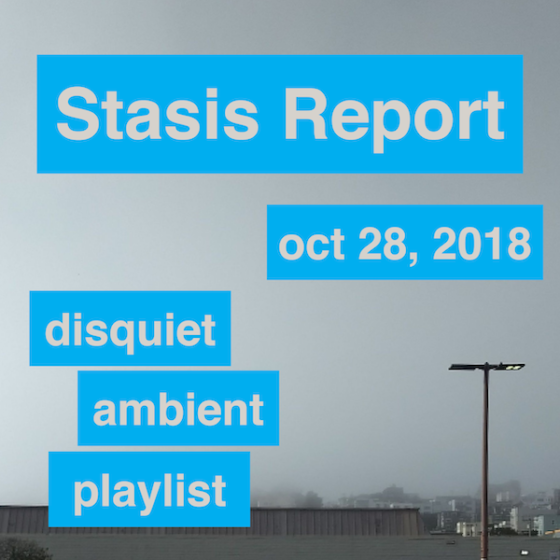 The latest update to my Stasis Report ambient-music playlist on Spotify and Google Play Music. The following five tracks were added on Sunday, October 28. Three are from the past month or so, one is just under a year old, and one is a classic from 1977.

✚ “Hey Ahh” by Saloli (aka Mary Sutton) off the new album The Deep End, released by the Kranky label on October 26, 2018: saloli.bandcamp.com.

✚ “Four Years Away,” the title track off the new SineRider (aka Devin Powers) album, released by the Sound in Silence label on October 26, 2018: soundinsilencerecords.bandcamp.com.

✚ “Moments” by Lucid Structure (aka Colin Mayo), off the December 2017 album We Were Never Here: lucidstructure.bandcamp.com. A new album, Measures, is due out November 22.

✚ “II” by John Carroll Kirby off the album Meditations in Music, released by Leaving Records on September 22, 2018: johncarrollkirby.bandcamp.com.

Some previous Stasis Report tracks were removed to make room for these, keeping the playlist length to roughly two hours. Those retired tracks — from Field Works and Marcus Fischer; Tim Hecker; Seigo Aoyama; Klara Lewis and Simon Fisher Turner; and Geir Sundstøl — are now in the Stasis Archives playlist (currently only on Spotify).