Three recent tracks and one classic added to the Spotify and Google Play Music ambient playlist as of November 4, 2018 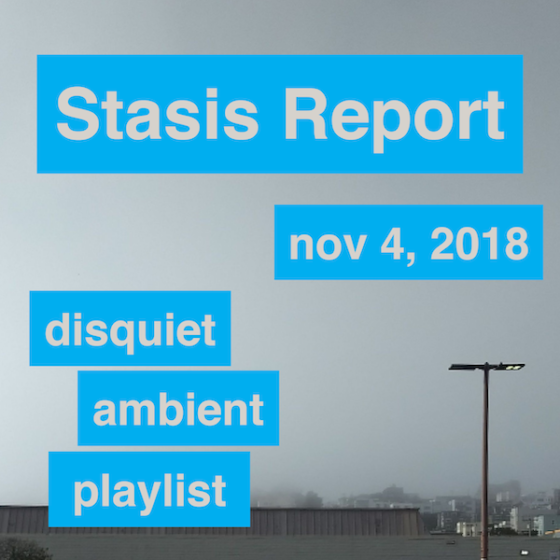 The latest update to my Stasis Report ambient-music playlist on Spotify and Google Play Music. The following four tracks were added on Sunday, November 4. Three are recent, one dates back to 1989.

✚ “Calm Before” from the album Glowing Pains: Music from the Gardens Between by Tim Shiel of Melbourne, Australia. And, yes, the next track on the album is titled “The Storm”: timshiel.bandcamp.com.

✚ “Souvenir of Bliss” off the album Reveries by Phillip Wilkerson: phillipwilkerson.bandcamp.com.

✚ And this week’s archival track is “Part II” of the 1989 album Tibet by Mark Isham: isham.com.

Some previous Stasis Report tracks were removed to make room for these, keeping the playlist length to roughly two hours. Those retired tracks — from Emily A. Sprague, Brian Eno (solo), and Eno with Kevin Shields — are now in the Stasis Archives playlist (currently only on Spotify).