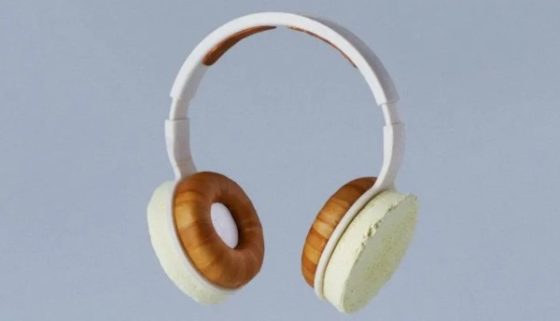 Earworm-Ready: In an effort to find consumer-grade utility for synthetic biology, researchers developed headphones grown from fungus, as well as “bacteria and biosynthetic spider silk.” (Via Subtopes)

Trainspotting 2.0: Learn about the “oto-tetsu” scene in Japan, where musicians use railway sounds to create music. “At the heart of what oto-tetsu creators do is love. The love of trains, the love of making tracks about trains. They are well-known only by each other; they’re not fame-seeking because it’s a scene that feeds itself.” (Thanks, Paul Socolow)

Pod People: Apple out of the blue released a new iPod, the seventh generation of the device. The sixth generation came out way back in 2015. In related news, Apple is rumored to be retiring iTunes at the Worldwide Developers Conference in San Jose, California, this week.

Practical Magic: In a kind of low-rent version of The Matrix, much of the ingenuity attributed to virtual assistants “relies on massive data sets built by subcontracted human workers earning low wages.”

3D Eavesdropping: New technology is combining echolocation and artificial intelligence “to decipher what the person is doing from the reflected sound alone.”

Political Slur: Deepfakes are an emerging technology of deception, but you don’t need to stick someone’s head on someone else’s body to create disinformation. The Minority Leader of the United States House of Representatives, Nancy Pelosi, has criticized Facebook for not removing a doctored video that showed her “appearing to slur her words and stammer and has been viewed and shared on social media millions of times.”

Bose Silence: When physicists worked in a lab to confirm Stephen Hawking’s black hole theory, they used “the point of no return” for sound rather than light, called the Bose-Einstein condensate.

Ear Buds: There’s a parody of fine dining in the new Netflix film from Ali Wong and Randall Park and directed by Nahnatchka Khan, Always Be My Maybe (much of which is set in my longtime San Francisco neighborhood, the Richmond District). In a scene shot downtown, transforming the playful geometry of Daniel Libeskind’s Contemporary Jewish Museum into a hushed, haughty restaurant, a character (whom I won’t identify so as not to spoil a separate joke) asks the waiter, “Do you have any dishes that play with time, the concept of time?” The waiter replies: “It comes with headphones so you can hear the sound of the exact animal you are about to consume.”

Thinking About Frameworks: I didn’t want to waste time at the start of this issue noting how long it’s been since I last sent one out. It takes awhile to get an issue together, all the more so when I miss a week, when life and work intervene. The sonic data runneth over. I love running this newsletter. I’ve run various email newsletters since 1994. The This Week in Sound email, to me, provides a framework. I think a lot about frameworks. There are various frameworks that help me process things, get things done, move ideas forward, close the loop on ideas.

Disquiet.com, which I’ve run since 1996, is a framework in the form of a long-running blog (I think it might even be OK, at this point, to refer to it as a very long-running blog, to the extent that its launch predates the word blog by several years). The Disquiet Junto music community, now in its 8th year, is a framework for collaborating with musicians and working out ideas about sound, music, and networked creativity in real time. The course I teach each spring, “Sounds of Brands,” at a local art college here in San Francisco is a framework for focusing specifically on that topic and working through the ideas with students, who, thanks to being from all over the world, bring their own diverse experiences and perspectives to the discussion. (It’s the only place I have experienced a student from Kazakhstan talk about the stultifying silence of Eastern Bloc educational institutions. The only place I have witnessed a chance conversation between students from Thailand and Saudi Arabia about the whistles they attach to their pet birds. The only place I’ve heard a student, whose family lives in a vast desert, talk about how compounds employ rifles to signal distant neighbors regarding everything from “There’s an emergency!” to “The party has started!”)

This was first published in the June 2, 2019, issue of the free weekly email newsletter This Week in Sound.