This is lightly adapted from an edition first published in the August 11, 2019, issue of the free Disquiet.com weekly email newsletter This Week in Sound.

Head Gear: A device called AlterEgo can hear when you talk to yourself. “The technology involves a system of sensors that detect the minuscule neuromuscular signals sent by the brain to the vocal cords and muscles of the throat and tongue. These signals are sent out whenever we speak to ourselves silently, even if we make no sounds. The device feeds the signals through an A.I., which ‘reads’ them and turns them into words. The user hears the A.I.’s responses through a microphone that conducts sound through the bones of the skull and ear, making them silent to others. Users can also respond out loud using artificial voice technology.” (via subtopes)

Intelligent Drum Music: “Sony is the latest company to dip its toes into AI-powered music. The company revealed this week that its researchers have created a machine learning model that can create kick-drum tracking.” Fun fact: “In order to train the AI system, Sony’s researchers compiled data from 665 different songs from a wide range of genres including pop, rock and electronica.” If they’d only gone for one more, they coulda given Black Sabbath’s Bill Ward a run for the heavy-metal money. More at google.com.

Virtual Hassle: “In scripted media like a pre-rendered 2D video, you always know where sound should come from — the audio levels for each channel never change from one viewing to the next. Even a 3D game has a workable level of complexity thanks to the predetermined parameters of the environment. With VR, there are simply too many variables to create perfect, realistic sound from every perspective.” And how a new algorithm from Stanford researchers may fix that. (via the Institute for the Future)

Earworm Autopsy: “I like the sound of instruments when they’re not perfectly in tune. It’s more interesting, this feeling of humanness that comes through when things aren’t perfect, or when a sound has a subtle sourness to it.” That’s composer Nicholas Britell in a great Vulture interview about his theme for HBO’s TV series Succession.

Et Tu, Skype?: Reportedly: “Microsoft contractors are listening to conversations between users on Skype who use its translation feature, according to Motherboard. This is done only if users are performing a translation function in Skype and not during any other typical Skype voice or video call.” More at windowscentral.com.

Smarter Phone: How do you hide where you are? Funny you should ask: “sophisticated products have started to emerge that add noise near a device’s microphones to mask sound in vicinity of the device.” (via subtopes)

TV Talk: Kalev Leetaru, a Forbes contributor, visualizes the consistency of the number of words per minute spoken on TV news: “The timeline below shows the average number of words spoken per second on CNN by day from July 2, 2009 to June 30, 2019, looking only at its captioned airtime. Over the past decade this rate has remained remarkably steady, decreasing ever so slightly through early 2015 and slowly edging back up ever since.” (via Sean Zdenek)

Secret Hideout: “After selecting the way I’d like to feel in an app (I believe I chose ‘energize’), I lie down on a leather pad, don headphones, and close my eyes, listening to a soothing world beat with a strong Om undercurrent. Ross is a big believer in the healing power of color and sound. (Her team went so far as to develop an installation at Milan that demonstrated how just sitting in different rooms can affect your core physiology.) For 15 minutes I wonder what I’m doing, wasting time on this silly bed. Then I stand up, eyes suddenly alert with a skip in my step.” Mark Wilson of Fast Company describes a visit to Google’s “top-secret design lab.” (The Ross is Ivy Ross, “vice president and head of hardware design.”)

Going Quiet: “I knew I had a problem when I started wearing headphones around my apartment,” begins Joel Pavelski’s GQ story about taking a “month-long sound fast.” First he had to hit rock bottom, which happened when his shower speaker broke: “I stopped and listened while my breathing went slowly back to normal. The shaky, queasy feeling went away. And, after a moment or two, my own thoughts rushed into the void. For a few brief, blissful minutes I re-acquainted myself with my internal monologue. It felt like a phone conversation with a friend that I hadn’t talked to in years.” Of course, once you stop using headphones, you don’t stop listening. Some might say that’s when you actually start.

/ / A GOOGOL OF BLOGS Reading the web

As always, if you have a blog related to sound or music, let me know. Both this week’s entries are from Australia, per chance.

Reel Life: Jason Richardson picks up the story (from last week’s This Week in Sound issue) of Sony’s purchase of the Milan Records movie-soundtrack label, with observations about fellow students in TV production, specifically their habit of “adding soundtrack-style music to their own lives for feeling of being part of a movie.” 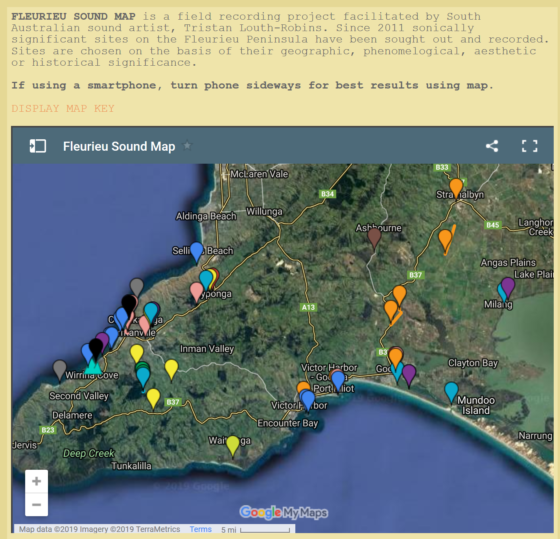 Sound Flâneur: The sound artist Tristan Louth-Robins has renewed his blogging vows with a lengthy update on his creative pursuits, including his great Fleurieu Sound Map, shown above.