So, it’s unclear to me how long this has been around, but you can tweet sounds. Not merely sounds that are links from other sources, but from within Twitter itself. I only got my new phone a few months ago, and all of a sudden today the iOS Twitter app had a little colorful waveform symbol next to the photo, GIF, poll, etc. options, and there was a little announcement saying it was new and I should try it out. So, I did.

My initial tweet, which isn’t embedding easily here, hence the link, contains 17 seconds of living room room tone (“living room tone”?). I could hear fog horns and passing cars from where I was seated, on the couch, when I recorded it, but I’m not sure how much is evident in the audio recording. Either way, this is nifty. Here’s what the tweet looks like: 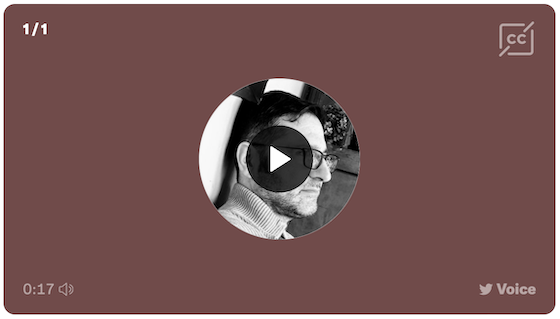 Of course, it’s not that simple: Our phones “hear” differently from how we do. And describing is itself a form of recording, of inscribing. (I wrote an essay on this topic back in June 2017, “Audio or It Didn’t Happen,” for New Music Box: nmbx.newmusicusa.org.)

It’s funny that this thing seems to be called “Twitter Voice,” since the human voice is to non-verbal sound what sight is to sound in general: an overbearing presence. I’m sure this will be used for more than voice. Oddly, there was a Twitter blog post, which I vaguely remember, back in 2020 about the service, but I think today is the first I saw (well, heard) it in action.