And the start of my work with Justin Green 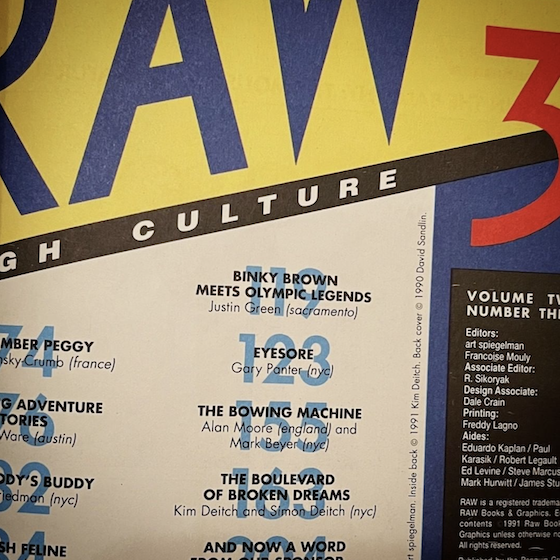 I started editing comics three decades ago this year, back in 1992. I don’t do it anywhere near as often as I used to, but I still do on occasion, and I read comics all the time. The first artist I worked with was Adrian Tomine. The second was Justin Green. Both became long-running collaborators in the pages of Tower Records’ Pulse! magazine. This weekend, while tidying up my office, I came upon this 1991 issue of Raw magazine, which is how I first met Justin. Each issue of Raw listed on its table of contents the home base of each artist, so it was always places like London, Paris, New York (back when New York was more likely to mean Manhattan than Brooklyn), Milan, Chicago, and so forth. And yet there, in volume two, number three, was Sacramento, California, which is where Justin lived, and where I happened to live at the time, as well, because it was the home base of Tower Records, where I’d started working in 1989 (after relocating from Brooklyn a year out of college). As with Adrian (also then a local, still in high school), I reached out to Justin to see if he wanted to talk about comics, and he ended up doing a lengthy series for Tower, Musical Legends, which Last Gasp collected into a paperback in 2004. Stumbling on this page after so many years brought back such a flood of memories, and also a distinct sense of how different media and communication were in 1992 — how location, and print, and correspondence differ from how they function today.