Special "The Queen Is Dead" edition

Additional sound-studies highlights of the week originally appeared in the September 12, 2022, issue of the free Disquiet.com weekly email newsletter This Week in Sound: tinyletter.com/disquiet.

▰ “It is not yet clear if Morrisons [a U.K. chain] plans to close its stores but the supermarket chain was the subject of reports that it had turned off the beeps at its checkouts as a mark of respect to the Queen — something it denied. Morrisons said: ‘Our checkout beeps are not off. They have just been turned down, as our music and tannoy announcements have been switched off in stores.’” Side note: Tannoy (with a capital “T”) is a nearly century-old manufacturer of speakers. The word (with a lowercase “t”) apparently is a generic for loudspeakers, like fridge (from Frigidaire) is for refrigerators. ➔ theguardian.com

▰ Big Ben only came back to life on December 31, 2021, after four years of repairs. It played a special role for the Queen’s funeral. “The procession will reach Westminster Hall on the hour. The timing will be just so. ‘Big Ben beginning to chime as the wheels come to a stop,’ as one broadcaster put it. … At 9am, Big Ben will strike. The bell’s hammer will then be covered with a leather pad seven-sixteenths of an inch thick, and it will ring out in muffled tones.” ➔ theguardian.com

▰ A 2017 letter to the Financial Times with details on the quieting of Big Ben: “In the basement clockroom of the House of Commons is a hammer extension, made by Thwaites & Reed, which when attached to the hammer of Big Ben allows the sound volume to be reduced as required. Dent, the original maker, made a leather pad secured with belts which when strapped to the bell hammer softens the tone. A replacement pad was made by Thwaites & Reed and is stored behind the pendulum. Both these devices were ordered and paid for by the Parliamentary Estate, and coupled with the different ways to ring the bell, provide multiple combinations for clock operation and bell sound.” ➔ ft.com

▰ A 1910 London Illustrated News photo of the bell with the pad in place: ➔ books.google.com 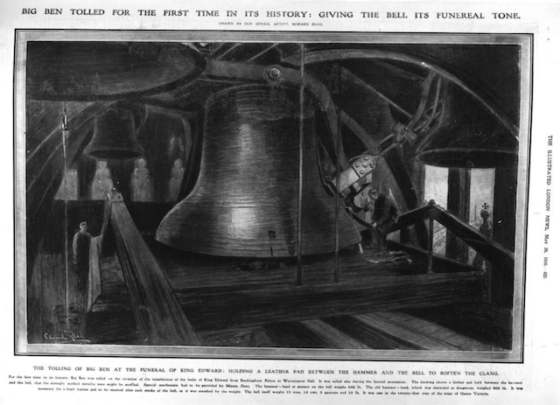