These sound-studies highlights of the week originally appeared in the November 29, 2022, issue of the free Disquiet.com weekly email newsletter This Week in Sound: thisweekinsound.substack.com.

▰ HOLD YOUR APPLAUSE: As I mention each week, I love getting TWiS tips from readers, especially regarding topics (e.g., sports, fashion, romance fiction) in which I am virtually illiterate. Bruno Ruviaro wrote in about the World Cup:

“With the World Cup going on and all my family and friends in Brazil watching games, I came across this interesting & unexpected effect of online streaming delays and communal sound. Soccer fans in Brazil who watched the game via streaming got extremely annoyed when they realized they were so behind the others who were watching on regular TV. They would hear the uproar of neighbours celebrating Brazil’s goal, while their own screen was still 30-40 seconds in the past. In soccer’s terms, of course, 30 seconds is an eternity. Totally ruined the game for streaming viewers.”

And he shared some coverage from newsbulletin247.com:

“Fans reported … having been warned about … goals in advance, through the screams and fireworks of neighbors. ‘I’m spoiling all the goals because of the neighbors,’ posted one Twitter user. ‘It’s so much different delay that each person here in the building reacts at a different time,’ wrote another.”

▰ BOXED IN: Caity Weaver, writer, and Alec Soth, photographer, teamed up for “Could I Survive the ‘Quietest Place on Earth’?” — a New York Times piece about an anechoic chamber in Minneapolis. That it takes its origin from a story in, of all things, the Daily Mail, is somewhat troubling, but Weaver makes a solid case for the specific location’s internet fame (a term I predict will someday replace the current meaning of the word “infamous”), thanks to the groundswell that initially informed the Daily Mail story, and more recent attention on TikTok and YouTube. The Minneapolis spot isn’t the anechoic chamber where John Cage had his silence epiphany. It’s a discarded one from Sunbeam, purchased from the appliance manufacturer by Steven J. Orfield, of Orfield Laboratories, in the 1980s. Among many things of interest in the story, including Weaver’s fine description of facing the challenge of monumental silence, is a showdown between Orfield and Microsoft for the Guiness Book of Records title. (Read free with this gift link — and thanks to the many people who shared the story with me.)

▰ IVONA BE A CONTENDER: There’s so much news about the declining profits (and future) of the seemingly ubiquitous voice assistants like Alexa, Google Assistant, Cortana, and Bixby that I’m still wrapping my head around it. Here’s one bit, from Gizmodo:

“Amazon marketed Alexa at a low price in order to use it as a conduit to get consumers to purchase more from Amazon, but the voice assistant quickly became the subject of innocuous requests to play music and to relay weather conditions, not to purchase more laundry detergent. … ‘Alexa is a colossal failure of imagination,’ an anonymous former employee said to Insider. ‘It was a wasted opportunity.’”

▰ KEY OF LIFE: Like a lot of “why” news stories, the NPR discussion “Why the key change has disappeared from top-charting tunes” is more of a “that” story — that is, it says “that” happened, without much concrete why. In brief, according to Chris Dalla Riva, a musician and data analyst (at Audiomack): “from the 1960s through the ’90s, roughly a quarter of No. 1 songs changed keys.” By contrast: “in the entire decade from 2010 to 2020, there was only 1.” (See this week’s TWiS Sound Ledger for its identity.) Dan Charnas, author of the great book Dilla Time, suggests that overfamiliarity undid the technique: “Charnas says the key change kind of got stale. It sort of became a crutch.” NPR host Ari Shapiro notes changing times: “Instead of melody, popular music today often prioritizes rhythm, like rap and hip-hop.”

I wonder if part of the decline in the popularity of the key change has to do with music becoming more always-on in our age of streaming (Audiomulch, Riva’s employer, is itself a streaming service). There’s an argument that most music today is experienced as ambient music — that is, as background sound that one might elect on occasion to actually pay attention to – and that for many people, its purpose is to set a consistent tone and back away. That would mean that songs are most appreciated when they don’t change, and that they’re appreciated precisely when they hold a certain emotional tone for the length of their playing time. (Thanks, Rich Pettus.)

▰ RING CYCLE: Major thanks to the folks at eurogamer.net for introducing me to the concept of the “Sound Ring” in the video game Fortnite. In brief, the Sound Ring visualizes sound effects, so you “see” the sound effects as they occur. Says one Eurogamer writer:

“For someone with hearing issues like me it’s a game-changer, but I’ve been talking to a number of people who don’t have hearing issues and who also use it and also find it to be a brilliant thing.”

“I think it’s a fantastic piece of accessibility design and a genuine aid for everyone. It helps me play better — prioritise what I’m going to do next based on something’s proximity, discover chests or other players I might not have had cues to. It makes me more alert to the game and its world feel more alive to see visual clues to things I might not have picked up myself.”

Even if you don’t play video games, it’s a fascinating UX topic. Note that these aren’t visualized like comic book or manga sound effects. It’s something quite different. Here’s a still image via fortniteintel.com: 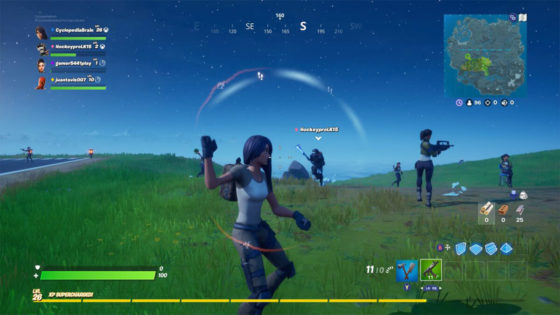 Apparently, though, the Sound Ring is (or was?) somewhat controversial. Some gamers are (or were) quite opposed to the Sound Ring (assuming you’re not deaf or hearing impaired), at least in part because when first deployed, the in-game sound was reduced from stereo to mono, though apparently that issue was corrected at least a year ago

▰ QUICK NOTES: NO KITTEN: A cat owner, Lucas Fischer, in Indonesia uses AI to “scientifically measure” how “annoying” his pet is: “The app uses Apple’s Sound Analysis framework to recognize the noises made by a cat. Sound Analysis can identify over 300 specific sounds including laughter, applause, and, of course, meows” (meow.lucas.love). ▰ HANDS-FREE AUDIOBOOKS: When using Audible on iOS you can now use Alexa voice commands to navigate your audiobook, such as pause or repeat a section. ▰ OFF THE HOOK: The airline Frontier has done away entirely with human phone support in favor of “fully digital communications.” ▰ LET’S SUBMERGE: The Unreal Engine now supports multichannel audio, meaning game developers, among others, can newly “couple a 3D interface with 3D sound.” (For someone like me who mostly loiters in video games, this is a virtual flâneur’s dream come true.) ▰ FLY LIGHT: The Candela P-8 Voyager, due in 2024, is a “flying, whisper-quiet explorer vessel” with an “electric hydrofoil” that is said to significantly reduce sound underwater. ▰ REST IN PIECES: Tom Phillips, the British painter perhaps most widely known for his work with Brian Eno, King Crimson, and the Who, and for his decades-long collage exploration, The Humument, died yesterday, November 28, at age 87. (I fell hard for Phillips during high school, and never lost interest. I treasure my hardback copy of the original A Human Document book, by W.H. Mallock, on which Phillips’ The Humument was based.)