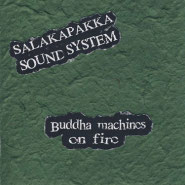 Though the original loops on the FM3-produced Buddha Machine are generally less than a minute in length, Salakapakka’s mixes range from five minutes to a dozen, each combining the loping cadences and heady synthesis of the FM3 material with various effects and sonic elements. For example, “Street Buddha,” the album’s penultimate track, add the tremulous, quasi-flamenco original (fans of the Machine will know which I mean) with street noise and chanting, before the piece expands into a chasm of echo. “Monk with No Name” suggests a gothic dance effort by Enigma or Dead Can Dance. “Delayed Mantra” adds heavy, noise-laden feedback, much of which is applied to a clip of a spoken prayer. Another, “Kapina TiibetissÃ¤,” adds the thundering heavy metal; the translation of “Kapina” is explanation enough for what might otherwise sound like an inexplicable combination — the word means “rebellion.” Two particular favorites are “Lo-Fi Buddha” and “Buddha Doesn’t Smile Anymore,” both of which are among the album’s softest, most pleasant tracks, and are, for Buddha Machine regulars, tonally most of a piece with the source.

Salakapakka is a good guide through his own work. On the post in which he announced these mixes, he said the following of “Street Buddha”: “Street Buddha is a growing piece which includes various FM3 loops, material of chanting beggar monk, shopping mall noises and ringing bells I recorded during my visit to Osaka.”

More information on the Buddha Machine 2.0 (and its predecessor) at fm3buddhamachine.com. Read the recent Disquiet.com interview with FM3’s Christiaan Virant, “Buddha Machine, Reloaded.”