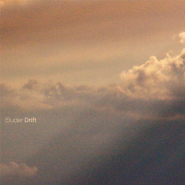 There’s a texture to all four tracks of Eluder‘s Drift (Archaic Horizon) that suggests the music was copied — surreptitiously, perhaps — from some rare, dusty old vinyl record. The static in the background is at times as loud as anything in the foreground. This static, this noise, is a scratchy, rough-hewn thing, immediately summoning mental images of fuzz-encrusted turntable needles and fingerprint-coated LPs. From an initial listen to Drift, you’d think you’d discovered some ur-drone, some ancient (well, in pop-music terms) album that predates today’s drone-rich ambient-music community not just by decades, but by several significant generations of recording technology.

Truth be told, though, all four of these pieces are of recent vintage. The vinyl texture is just a foundation, above which Eluder places elegiac tones, soothing embraces like the organ modulations of “Drift With Me” (MP3), which eventually peaks out like some brilliant sun coming over a distant mountain, and the more atonal “Moon Plea” (MP3), a thick pool of gorgeous dissonances.

Get the full set of four MP3s at archaichorizon.com. More info on Eluder (aka Boise, Idaho-based Patrick Benolkin) at myspace.com/eludist.