The website dancerobotdance.com is a public spot for the music of Brian Biggs, the great illustrator (Shredderman; Dear Julia,) and a good friend; he drew some music-related comics I edited back in my Pulse! magazine days. He was also a participant in the Brian Eno/David Byrne remix project I curated, Our Lives in the Bush of Disquiet (at archive.org). The “Dance Robot, Dance” site is built on the soundcloud.com web platform, a Berlin-based service that is fast becoming a kind of WordPress/Tumblr for audio exhibitionists. It’s a place where musicians, often for whom music is something of a side project, can share their work. Thanks to its community tools, it’s even closer to LiveJournal than to WordPress, but more on that in a moment.

My favorite of Biggs’s first batch of uploads is “Wawaraw,” the track’s title being onomatopoeia for what it sounds like. It’s little more than a waveform going through some transformations, and it clocks in at barely a minute and a half, but it’s a crystalline little audio experiment that’s endlessly listenable. The first 40 seconds are just this wave, which speeds and slows (you can virtually see the oscillator), until it hits a steady rhythm. A proper beat kicks in, matching the pace of the wave — and then the fun starts, as Biggs cuts and splices and mutes (among other actions) the wave itself, which in turn becomes a bouncy melodic line. The simplicity of the concept, combined with the verve of the result, brings to mind a sound check by the band Underworld.

What appears below is a window into Biggs’s Soundcloud-powered music site. The interface, which is embeddable (I guess that’s self-evident), just like a YouTube or Vimeo video, allows for downloading, sharing, and playing. It also displays a visualization of the track:

Soundcloud’s a useful platform. Like the more text-oriented self-publishing tools (WordPress, Tumblr, LiveJournal), it provides a turnkey solution with easy personalization. As for embedding, the above code dropped in without any editing on my part. (I did add a “padding-bottom” element for spacing, but it wasn’t essential, and I edited the song-attribution text a tad.) The downloadable file is a sizable WAV file, but the player itself seems to contain a well-compressed MP3, produced by Soundcloud to reduce the bandwidth demands. (The same is true of the great freesound.org website’s player.) This link should go to that file within the interface-wrapper: MP3. But if it doesn’t, just enjoy the downloadable and streamable versions listed above.

As for Soundcloud’s community tools, that’s where it really gets interesting. In addition to the dancerobotdance.com URL, there’s a soundcloud.com/dance-robot-dance page, which shows whom on the service Biggs is following, and who’s following him. As with MySpace, it’s a closed community, to the extent that it doesn’t, currently, allow for integration of “followers” outside the universe of Soundcloud-powered sites, but should the service reach a profitable threshold (there are tiered payment plans for “pro” users), it could blossom into a place for not just shared music, but for dispersed, asynchronous collaboration.

Visit Brian Biggs’s home page at mrbiggs.com, which houses not only his illustrations but some additional music (on the Noise page). Among other things, Biggs has done numerous posters for concerts at the Fillmore in San Francisco. Below is one of my favorites: 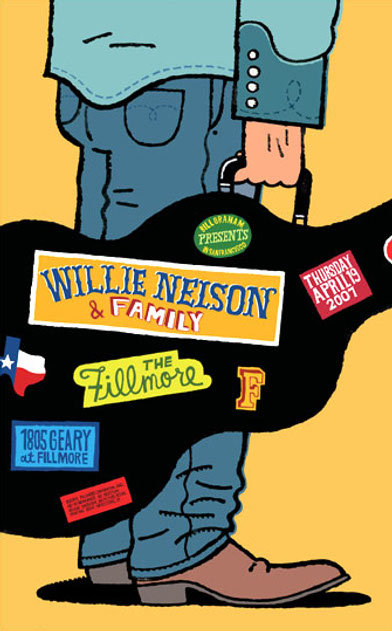 It’s pretty much superfluous to include this MP3 player in this post, since the embedded Soundcloud widget above should suffice, but for consistency’s sake, here it is: