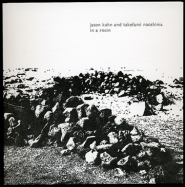 For a recent collaboration, musicians Jason Kahn and Takefumi Naoshima invited a third participant into the room. That participant is the room itself. The result is In a Room, a recent full-length release, for which they’ve made available an excerpt, just over two minutes in length. The piece (MP3) is a detached experience, in which the room tone — a background whir, and an enveloping white noise — blankets all else, from footsteps, to murmurs, to other sounds, like distant waves and low hums, that are, presumably, the microsonic music being produced by Kahn and Naoshima.

Given the title, the echoes, so to speak, of Alvin Lucier are unmistakable. As Kahn writes in a brief liner note, “Due to the fact that we played very softly and sparsely the sounds of the room and even those from outside take on equal importance with the sounds we are making with our instruments.”

More information at the website of the releasing label, Wind Measure Recordings: windsmeasurerecordings.net. More on Kahn at jasonkahn.net, and on Naoshima at geocities.com/tanzaque.