The title of Lawrence Lessig’s recent book Remix refers to all manner of cultural activity, not just the professional DJ taking two songs and yoking them into one, but also everything from kids swapping out the audio of anime snippets, to gallery-based visual artists appropriating sections of Hollywood movies.

Still, at this moment, the word “remix” sums up select mental images, primarily, I’d argue, a laptop and a pair of turntables. So, it seems appropriate, with a nod to the latter, to close this week’s series of Disquiet Downstream entries — all of which have been tailored to the topics covered in Remix — with a bit of instrumental hip-hop.

Though much of the techniques employed by hip-hop had precedents in avant-garde tape loops and the means by which jazz musicians and classical composers would interpolate pre-existing melodies, rap music is what brought the whole idea of sampling into the modern public imagination. Back in the day, as they say, sampling was the result of painstaking use of audio tape and of computer equipment with severely limited data capacity, as well as the live performance mode that came to be known as turntablism. Today, turntablism is taught in colleges and music schools, and digital loopers can handle essentially infinite amounts of data. Perhaps as a reaction to that open-endedness, a lot of instrumental hip-hop has come to the fore that celebrates the quieter gestures, the surface noise, the way a beat can shape the moment, the way an echo can fill a room. This is instrumental hip-hop: beats as a musical end unto themselves, not necessarily crafted with the intention that a vocalist will drop some rhymes atop them. 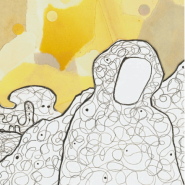 The California-based producer ProF (born Cheldon Paterson) has posted, as a teaser for the forthcoming album Superorganism (5&1/4 Records), two and a half minutes of hip-hop bliss, beats that slow the pace of your breathing, and watery samples of piano, strings, and muffled moans that fill the space with a contemplative vibe (MP3). The track is titled “A Life Force,” and ProF recently made it available for free download via his myspace.com/professorfingers page.

Though it’s quite possible to quote a pre-existing song and make that reference a humorous, incongruous, or otherwise meaningful statement, part of the art of ProF’s piece is that whatever material he has used, he has so subsumed it into his work that it’s all largely unidentifiable. The result is music that you know came from somewhere else, but where doesn’t matter; the only where that matters is where the sounds ended up.

More on the release at tablist.net and his myspace.com/professorfingers blog post.

The focus on Lessig’s Remix this week has been intended as a supplement to the online group discussion I’ve participated in at artsjournal.com/gap, thanks to an invitation from “Mind the Gap” blogger Molly Sheridan.