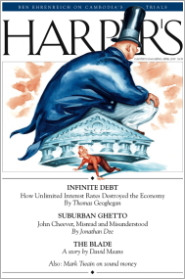 One of the six parts of the Homeland Security Suite by composer Robert S. Cohen:

There is actually no “White Alert” in the Homeland Security Alert System. In the simplest of terms it represents the moans of the planet Earth or, perhaps, the echo of our souls after the final apocalypse. The color white represents both the blinding flash of a nuclear explosion and a blank sheet of paper on which everything has been erased.

As excerpted in the April 2009 issue of Harper’s (harpers.org). The other five parts of the suite are Green, Blue, Yellow, Orange, and Red. More information on Cohen’s work at honeyrock.net.