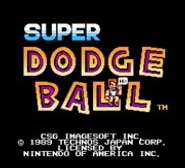 Just over 20 years ago, Nintendo released Super Dodge Ball for the NES system. Not only have gaming consoles evolved since those 8-bit times, but so too have the passions of gamers. There are entire online communities devoted just to outdated tech like the NES, something Nintendo has acknowledged by packaging classic games, and putting titles like Super Dodge Ball up on its virtual Wii store for inexpensive downloadable fun.

There are also communities devoted to the music of those old-school games. One such community is Overclocked Remix (at ocremix.org), where members post reworked versions of video-game theme songs. Case in point, a mix by Avaris (aka Shaun Wallace) of a tune from Super Dodge Ball (MP3), which adds field recordings to the original, cuts it up into something new, and plays with what Avaris/Wallace himself describes as “the most stereotypical representation of China in sonic form ever created.”

There are, as of this writing, not one but four Super Dodge Ball remixes up at Overclocked, including a second, earlier “Theme of Team China” revision (see ocremix.org).