What a difference a common key makes. The ingenious inbflat.net website displays 16 videos in a 4 x 4 grid. Each video is of a solo instrumentalist, playing guitar or keyboards or trumpet or xylophone (all in B-flat, per the work’s title), and the listener/user is invited to initiate the clips simultaneously, or at any interval. Here’s an image detail: 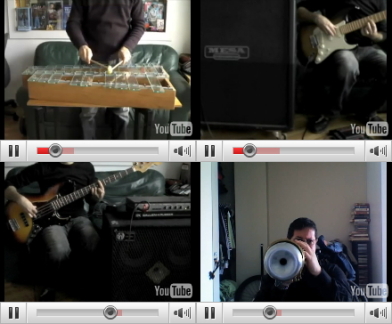 The resulting music is ever-shifting, but free of anything approximating tension or dissonance — it’s lilting, subtle, peaceful, and quite beautiful. The site was developed as an experiment by Darren Solomon, of the group Science for Girls. He’s made a formal, fixed recording of one “performance” of the installation (MP3), and has invited individuals to contribute their own videos. He proposes that the MP3 be listened to while you perform, in order to provide some sense of inner coherence to the otherwise open-ended work. For anyone looking at what culture as formed by “Web 2.0” — which I’d define as a situation in which the network is greater than the sum of its participants — sounds like, this is a good starting point.

The title of Solomon’s piece is presumably a nod to Terry Riley’s In C, which pioneered the idea of a composition that consists of various parts that can be played in freely associated, musician-determined permutations.

For an early iteration of the work, check out Solomon’s January 22 post at scienceforgirls.net.

As a follow-up (this is the Internet, in which there is an answer-song to every song, including for every answer-song), someone developed tikirobot.net/BbBuddha, which invokes an “auto-replay” function, meaning the loops will play forever (a la the Buddha Machine), making for great background listening. (Several people recommended the inbflat.net website, so special thanks to the first of them, Michael Ross of myspace.com/prehab.)