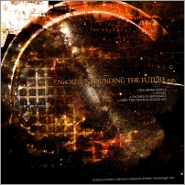 The elastic percussion of drum and bass, once a radical approach to moving beats to the front line, so astonishingly new, is now a familiar sound, perhaps as close as the past decade and a half has come to contributing a new rhythm to pop music. Not that drum and bass was ever pop, really — the closest it got was as a tangent, an option, a flavor, a version to be added to the flipside of a 12″ single. The impetus for a remix commission, but not for a song itself.

But the beat, as they say, lives on, and often the drum and bass beat is at its best when it is little more than that beat: the up and down, the sideways motion, the sudden returns, the constant change in direction, the crabwalk-on-speed vibe. And those precipitous drop-outs, the ones that through the sheer and sudden absence of sound posit the entire preceding track as a kind of beat unto itself, a solid if variegated mass of noise that the silence interrupts: silence as a beat.

This is the sort of drum and bass committed by Polish producer N-Noiz (aka Marcin Witkowski), whose Unbounding the Future EP, as best represented by the track “Red Spider Nebula” (MP3), is available for free download from plainaudio.com.

Sure, the once anarchic drum and bass beat has long become a common spice in TV commercials and Hollywood movie scores, but its virtual absence from proper pop music maintains it reputation as a permanent outsider. What was once aggressive may now be comforting, even nostalgic (fans of Photek will experience pleasurable flashbacks due to N-Noiz’s noises), but that may be for the best. We can put assault aside, and take pleasure in the sonic choreography.