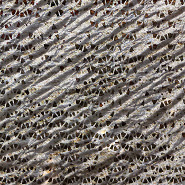 End the week on a drone, a rich quavering drone like some steam-powered UFO making routine passes thanks to an insatiable curiosity for earthbound lifeforms, or a quasi-melodic lull. Those would be the opening and second tracks of Craque‘s new three-piece release on the Stasisfield netlabel, but they’re not its best. The real keeper on the album, which is titled Wind Space Compost, is a peculiar concoction of captured string noises, laid out like a concatenation of moments — brief strums, extended hums, backward masked moans, and ever so creepy scrapings (MP3). Full release at stasisfield.com. Visit Craque (aka Matt Davis) at craque.net.