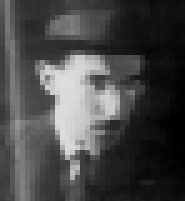 There now are 17 translations of the poem “Autopsicografia” by Fernando Pessoa in the Disquiet.com Pessoa subsite, at disquiet.com/thirteen.html. The ancient frame-based structure of that HTML feature allows simultaneous comparison, side-by-side, of multiple versions (interpretations, remixes) of the original poem. This 17th version is the automated rendition, courtesy of Google Translate (translate.google.com), made at the suggestion of reader Douglas Storm. The inclusion of a machine-rendered version is true to Pessoa’s Futurist interests — and, perhaps, to the potential misreading by some readers of the author’s intention, given the “auto” (i.e., “self”) in the poem’s title. (Thanks, Douglas.)