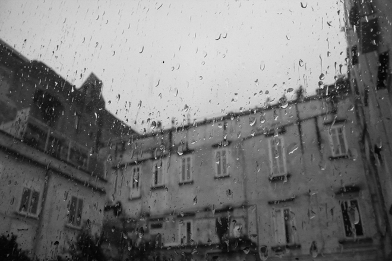 Four musicians took field recordings into their studios and created something new from them, all for the debut of Editions, a web publication of soundwalk.com. The musicians are Francisco LÃ³pez, BJ Nilsen, Yann Novak, and Roberto Paci Dalo, and they used as their source recordings made in these locations, respectively: Mamori Lake in the Brazilian Amazon; Vatnsleysuströnd, Landakot, Iceland; Los Angeles; and Rapoli, Italy. Each track is accompanied by a brief description of the work, an artist bio, and a representative photo, such as the one up top, shot by Dalo in Napoli.

Despite a description by Soundwalk that these artists “use environmental field recordings as a point of departure in their work,” for some of them, the recording is the beginning and the end. The finishing work is, in fact, a raw field recording, framed by selective editing. That appears to be the case for Nilsen, whose Icelandic document captures birdsong, rain, and the ocean. The moans with which opens Novak’s L.A. could be mistaken for audio that has been slowed down, but it is in fact a distant car heard in the non-space that, as Novak puts it, is inherent in the indoor/outdoor middle-ground so intrinsic to Southern California living.

LÃ³pez and Dalo, to the contrary, take their recordings of the world and mix them into something new. For LÃ³pez, it appears to mean looping the sound of frogs into something rhythmically enveloping; for Dalo, adding oscillating, rudimentary electronic sounds — imagine a particularly existential scene from an early Star Trek episode — that slowly subsume the real-world sounds of city life.

The collecting in well-programmed, in that it balances the two non-mediated works, the Nilsen and the Novak, by bookending them with the enhanced/extended works, the LÃ³pez and the Dalo. Kudos, as well, for the explanatory materials. Subsquent editions of Editions are eagerly awaited.

Visit the Soundwalk Editions homepage at soundwalk.com. More on LÃ³pez at franciscolopez.net, on Nilsen at bjnilsen.com, on Novak at yannnovak.com, and on Dalo at giardini.sm.

Update: At the request of Soundwalk, the files have been removed from this post. Please go to the above link to experience the audio.