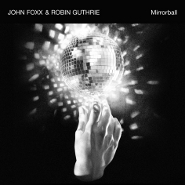 This week, the Disquiet.com MP3 Discussion Group returns to collectively given a listen to Mirroball (Metamatic Records/Universal), a new-ish album-length collaboration between two early figures in electronic pop music: John Foxx (b. 1947, original vocalist with Ultravox!) and Robin Guthrie (b. 1962, cofounder of Cocteau Twins). It’s a gauzy pop album, redolent with Foxx’s maudlin-romantic singing and Guthrie’s florid shoegazer lushness. As such, it’s a little off topic from the more abstract work generally featured on Disquiet.com, but between its opulent haze makes it a peer to the kind of work that’s often cited on Disquiet.com, and Guthrie’s shoegazer credentials played a role in the decision-making, too. For reference, the track listing is as follows:

A little note on format: This is by no means a closed discussion, so do feel free to join in. Also, the initial posts by participants are all written before they have an opportunity to see each other’s take.