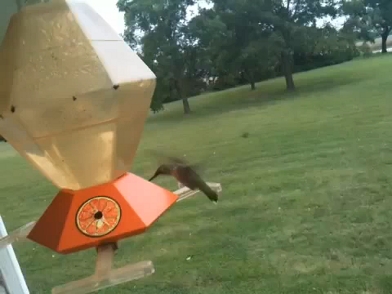 This past Sunday afternoon, the hummingbirds were swarming in the backyard — beautiful little antic flying machines that they are. From a distance, they resembled large, stoic insects, and the sound they emitted was less than birdlike. I took a moment to note this at twitter.com/disquiet: “Not only are hummingbirds loud, they click like Geiger counters.” And shortly thereafter, two replies in quick succession arrived from twitter.com/qdot:

qDot @disquiet I actually managed to get a very nice recording of hummingbirds by duct-taping my iphone to a feeder, heh: http://is.gd/5vn4z # qDot @disquiet And it came out in @rjdj sounding like http://www.rjdj.me/user/qdot/recording/23198/ #

This qDot is computer engineer, musician, and experimenter Kyle Machulis, who was writing to report on one of his experiments. As the annotation to his YouTube video explains,

“Duct-taped my iPhone to a hummingbird feeder, since they’re fairly shy and wouldn’t come close while I was hanging around by the feeders. War insues.”

Machulis had used his iPhone to record the sounds and sights (screenshot above) of the hummingbirds. But that was not enough. He then fed the audio through RJDJ, a popular application for the iPhone and iPod Touch that serves as a programming environment for the creation of all manner of audio-games and sound-toys. One such toy is Eargasm (see rjdj.me), which its creator, Damian Stewart, likens to science fiction (“Smooth harmonic voices right out of the Hitchhikers Guide To the Galaxy”) but that might also bring to mind the vocal processing in a song by Underworld. Eargasm takes sound and flings it back in a swirl of hazy, short loops that speed up as they get quieter, all atop its own inherent sound bed of ambient-pop tones — a process that is quite effective with those hummingbirds, their chatter-like clicks providing some grit to the soft background music (MP3):