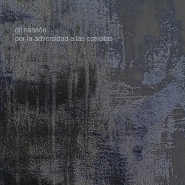 Contour Editions is a new record label based out of New York City. Its first three releases consist of two free album-length downloads and one long-form video. There are also plans for “physical” releases. Gil SansÃ³n‘s Por la Adversidad a las Estrellas, Contour’s inaugural free release, is a series of three transformation tracks, each taking a different source material as its starting point. The first track on the album, “Por la Adversidad a las Estrellas 1,” is a ghostly mix of quavering tonal elements and eerie little brittle noises (MP3). There are hints from whence it came — elements of vocal tones, as well as that certain randomness that suggests a natural field recording — but the truth is still surprising.

Writes SansÃ³n of the procedure that yielded the track:

“[It] makes use of samples of contemporary classical works that were submitted to looping and filtering processes. additionally, a rainfall field recording emerges slowly from the mixture of voices and instruments, and gradually becomes the main character of the piece.”

Two other tracks on the album transform electric guitar and a piano piece by Kenneth Kirschner. Full SansÃ³n release at contoureditions.com.