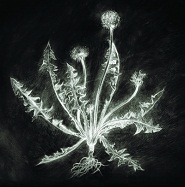 When they remake the film Deliverance — and they will, because everything gets remade, whether directly or indirectly — Scott Tuma (long ago guitarist with Souled American) will be hired to do the score. There will be no dueling banjos this time around. There will only be the creaky, meandering, semi-melodic noodling of old coots on a porch, a porch swamped by kudzu and collapsing under its own weight, what weight there is left in those old boards, eaten through as they have been by termites. The old coots’s half-remembered songs will break apart like the distracted thoughts they are, and they’ll be heard, in the film’s score, as mere fragments, muddied by audio effects that simulate the dank environs. That score may exist already in the form of Dandelion, Tuma’s new solo album, three tracks of which have been made available for free download by its releasing label, Digitalis.

There’s “Hope Jones (Jason’s Song),” which opens with the rough fire of a field recording before moving in and out of sour melodic figures (MP3), a voice appearing occasionally, straining to be heard.

And then there’s “Red Roses for Me,” which at times has the maudlin flavor of a great Pogues song, but works more as a series of self-contained aural segments, including snatches of birdsong (MP3).

More on the release at digitalisindustries.com. More on Tuma at myspace.com/scotttuma.