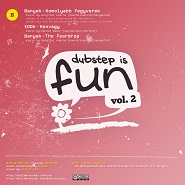 The excellent Complementary Distribution netlabel isn’t as prolific as it has been in the past, but a recent EP makes up for lost time with five tracks by four different artists, among them nAsty, Banyek, and NiT Grit, all working broadly speaking in a dubstep vein. The highlight of the record, titled Dubstep Is Fun! Vol. 2, is by tOOk. His is a nearly six-minute piece titled “HonvÃ¡gy,” which appears to mean homesickness or nostalgia in Hungarian (the label is based in Hungary, though tOOk appears to be in Belgium). The latter definition, nostalgia, fits with the sample of haunting vocals that is the core of the piece. The track opens with the voice all contorted, and when it shows up later, a verbal lamentation heard amid pounding drums and somnolent synths, it’s all the more affecting (MP3).