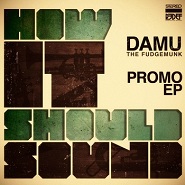 “Promo EP” is not the most enticing phrase to insert into the title of an album. But it gets to the point, and maybe that’s good enough. How It Should Sound – Promo EP is the six-track freebie taster of Damu the Fudgemunk‘s 27-track release that dispenses with the “promo” suffix. Damu exhumes ancient r&b and pop samples and forms from them what’s called “instrumental hip-hop,” even if that phrase can unintentionally conjure anticipation of jarring moments of silence when a vocalist was intended to toss off a rhyme or three.

These, however, are not tracks in search of a vocalist, though they aren’t in any way abstract, either. They’re carefully sculpted exercises in beat-making, with echoes of the siren-like frisson that made Public Enemy so trenchant (as on “Bills Be Gone,” which while slower than most Bomb Squad productions has a vibrant yodel-ish riff that’s just irritating enough to be endlessly listenable). Samples of turntable scratching on “Non-LP Bonus – Wonka Beat 3 (2009)” (in this case, it’s the prefix that diminishes expectations) reinforce Damu’s artful and rewarding backward glance on hip-hop production.