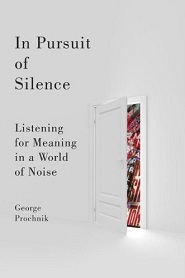 The more I think about George Prochnik‘s new book In Pursuit of Silence: Listening for Meaning in a World of Noise (out this coming week from Doubleday), the more he comes across as an abolitionist, rather than as a seeker. He’s running from noise, not making his way to silence. His related blog, inpursuitofsilence.com, is a great source of sound-related coverage, and a common theme throughout that coverage is the way that noise negatively impacts society, individuals, and nature. Yet it is all founded on a strong conviction on Prochnik’s part that the world is noisier than ever, which at times comes across like the opinions of those who believe that kids these days are more unruly than ever, or that the U.S. Congress is more polarized than ever, or that crime is worse than ever — opinions that seem civic-minded on the surface, but when poked at reveal an unproductive alarmism that is more about privileging the present that just so happens to be inhabited by the individual who is making the statement. (Privileging the present is different than idealizing the present; in these cases, privileging the present is rooted in a rote nostalgia-fication of the past.)

Despite Prochnik’s framing of the overall situation as “this new noisiness” (in his book’s introduction), it’s quite a simple operation to look to the past 50, 100, 150 years (and further) and locate strong evidence of anxiety about the relative (aural) volume of the world at those times. He cites such examples himself throughout the book, but their existence doesn’t seem to diminish his certitude that the planet is today at its loudest. (Just to posit one example, I can’t help but think that the reduction of light industry in many cities has made certain neighborhoods quieter, not louder.)

Such examples from the past are as entertaining as they are illuminating:

“In summer the noise of city streets, the cars, the elevated, the cries of children, the hand-organs, the flies, are not at all conformable to the supposed dignity of the court,” wrote Justice Frederic DeWitt Wells of the Municipal Court of New York City in his book The Man in Court, published in 1917.

“The 20th century is, among other things, the Age of Noise. Physical noise, mental noise and noise of desire — we hold history’s record for all of them,” Aldous Huxley wrote in The Perennial Philosophy in 1945. (The quote came to my attention in Kyle Gann’s new book on John Cage’s “silent” piece, 4’33”. The title of Gann’s book essentially sums up the theoretical/philosophical framework through which I view Prochnik’s venture: No Such Thing as Silence. Gann attributes the insight regarding Huxley’s influence on Cage to Douglas Kahn, author of the excellent survey of sound in art, Noise, Water, Meat.)

And in Emily Thompson’s phenomenal The Soundscape of Modernity: Architectural Acoustics and the Culture of Listening in America, 1900-1933 (2002), she goes on at length about the experience of urban noise at the turn of the 20th century. She quotes one Dr. J. H. Girdner from his “The Plague of City Noises,” which he collated in 1896: “almost all the noises he listed were traditional sounds: horse-drawn vehicles, peddlers, musicians, animals, and bells.” Thompson then follows the elements of the sonic cityscape, and notes that within 30 years of rapid change, mechanical noise had largely supplanted what she terms “organic” noise: “Some were energized, others enervated; all felt challenged to respond to the modern soundscape in which they now lived.” Her book is cited by Prochnik in his book’s bibliography as one of the key texts that influenced his thinking, but my read of Thompson only strengthens my sonic relativism, while Prochnik seems to have come away from it all the more convinced that the world in which we live has never been louder. (An 1896 mention in The Review of Reviews of Girdner’s “The Plague of City Noises” refers to “the various sounds that tend to make metropolitan life unendurable” [emphasis mine].)

Here are some notes on recent entries from Prochnik’s blog:

He takes issue with a communal “boombox walk” to commemorate the cherry blossoms in Washington, D.C., even though it’s just a one-time thing and is relegated to an evening slot — today, in fact: April 3, 5:30 pm. (Prochnik’s take, “A Surreally Bad Idea Whose Time Has Come,” is at inpursuitofsilence.com; event details are at bluebrainmusic.blogspot.com.) The event seems to have its roots in the boombox meetup Unsilent Night composed by Phil Kline. Kline’s creation of secular quasi-choral music that replaces strong melodies with ambient tones might seem like a positive development, but I suspect Prochnik would view the involvement of boomboxes as a sure sign that sound is being unnecessarily introduced to a civic space. Now, it’s rhetorically suspect to criticize someone for an opinion they haven’t actually uttered, so to be clear what I’m really emphasizing here is Prochnik’s dismissive response to a one-time event, which others might see as simply an additional way to celebrate the arrival of cherry blossoms.

Prochnik’s blog’s coverage of the science of birdsong (“Songbird Genome Decoded,” inpursuitofsilence.com) is rightly concerned that increases in human-made noise have unintended impact on birds. (This isn’t merely true of sound. Birds have been discovered to follow highways the way they once followed waterways.) Yet his closing comment is evidence of the exaggerated language, the alarmism, he brings to such matters: “the tip of the language degradation iceberg our culture is now crashing up against.”

The In Pursuit of Silence blog launched in November of last year with a brief note about “No Music Day,” a daydream-turned-reality of former KLF member Bill Drummond. Since then the website has provided a steady stream of interesting subjects. They may often twist into opportunities for Prochnik to bemoan the amplitude of our age, but not always. He makes some great points in his critique of Choe Veltman’s recent New York Times story about sound installations in San Francisco (she focused on the Audium and the Sound Wave Organ, at nytimes.com), in particular her odd comment about how the relative size of eyes (big) and ears (small) in the Na’vis in James Cameron’s Avatar is evidence of how culture today places “a far stronger emphasis on sight than hearing.” (I’m not even convinced Veltman’s description of the Na’vis is accurate. But as a longtime San Francisco resident, I found the most peculiar thing about the article was that it appeared in what is purportedly a section devoted to local coverage for residents of the San Francisco Bay area. The same article would have made far more sense in the paper’s travel section.) Prochnik’s entirely correct when he writes:

Near the conclusion, the author notes, “As inventive as some of these works are, they have to compete with many other distractions. It’s possible to walk right through a sound-art installation without even realizing it.”But isn’t it precisely one of the keys to the beauty of works like these that they DON’T try and compete with all the other distractions — that they ask of the spectator sufficient attention and awareness of the environment NOT to just walk through them without noticing? There’s a hint of criticism here, which to me smacks of sighing that, when all is said and done, the problem with silence is that it’s not noisier.

On inpursuitofsilence.com the blog, as in In Pursuit of Silence the book, Prochnik’s extremism might best be exemplified by the manner in which he expresses something approaching jealousy of those who are physically incapable of — or at least hard of — hearing. In a gloss (at inpursuitofsilence.com) on a great post about the history of hearing aids (at hearingsparks.blogspot.com), Prochnik ponders how necessary hearing aids really are: “But with a third of Americans now suffering some degree of hearing loss, according to Johns Hopkins University, and more than a third of Americans inserting some sound-feed device into their ears for some part of the day, one would think that self-consciousness about hearing loss, let alone hearing aids, might begin to wan. The Deaf should be viewed as early adopters to a sonic landscape that, between rising noise levels and declining hearing, will be less and less coherently audible to anyone without technological enhancements.” When you’re so critical of unwelcome sound that you give the appearance of envying those who are hard, or even devoid, of hearing, I think you’re doing your business right along the line that divides essayists from polemicists. (I’m fairly certain that Douglas Kahn, who writes eloquently on all matters sonic, uses hearing aids himself, but I don’t recall him ever having written about his experience.)

Alarmism is its own form of noise — and that idea is something that appears to be lost in the often strident language that Prochnik employs. He’s aware of this issue himself. In the book’s opening, he writes “To effectively promote silence, how does one avoid becoming louder than the sources of noise one is protesting against?” There’s an almost Jekyll/Hyde quality to Prochnik — one moment he can write with stunning beauty about how Zen, along with other spiritual traditions, teaches us that noise is a mental construct, and the next he uses derisive language to mock portable MP3 players and the people who make a routine of carrying them (“a little round dial that fits seductively in our moist palms”).

The unfortunate thing is that Prochnik’s extremism may muffle the otherwise insightful observations that fill his book, such as how many domestic disputes are often actually about matters of noise, and how John Cage’s supposed experience of his nervous system in an anechoic chamber at Harvard was more likely an incident of tinnitus (something Gann notes in more detail in his book, if that’s of interest), and how military veterans who take solace in religion after experiencing war may not be seeking God so much as feeling the need to escape a world that doesn’t live up to the ideals of the one they had been fighting for. That last lesson is the one that lingered with me as I came to wonder, as I mentioned at the outset, whether Prochnik is moving concertedly toward silence, or running angrily from noise. (I mentioned in my previous entry on Prochnik’s book, at disquiet.com, how he points out an interesting debunking of a certain myth about Pythagoras.)

I need to clarify that I am fully sympathetic to Prochnik’s personal concerns about noise, despite what my above statements might suggest. Like Prochnik’s, my hearing is sensitive — or, more to the point, I am sensitive to what I hear. Like him, I am very much the sort of person who is aggravated by sounds as seemingly tiny as the hard drive chatter on the Tivo in my living room, and by the throb of one particular fluorescent bulb that’s recessed into cabinets in my kitchen. When I bought my first iPod, I was stunned by how “loud” the hard drive was when I first turned it on (I was also a little unnerved by the device’s physical vibrations). When I switched from a desktop to a laptop years ago, my primary motivation was the relative quiet of the laptop’s internal fan. When I moved from one part of my neighborhood to another a year and a half ago, the noise level of the street was a deciding factor. (I liked one other house, until I noticed that a neighboring yard had a large cement structure that turned out to be a giant fish tank — just the thought of the sort of constant sound inherent in maintaining such a system nixed that option immediately.) I am very much the sort of person who has been kept awake all night thanks to a radio on a neighboring construction site that wasn’t fully turned off. But in the end, I simply don’t think of noise and silence as polar opposites, perhaps because I’ve read too much Cage and believe silence is an illusion.