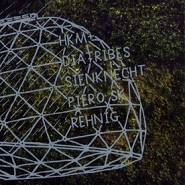 If only there were a thin line between electronic music and European free improvisation. Instead, there’s more of thick, broad line — a gulf at times, really — between digitally processed music and the rich culture of abstract ensemble play. It’s a gulf occasionally, and increasingly, bridged by individuals like Ikue Mori and bands like Diatribes. The latter, consisting of d’incise (laptop & treatments, objects, percussions) and Cyril Bondi (drums, percussions), recently teamed up with the trio HKM+ (Ludger Hennig: laptop & software instruments; Christof Knoche: bass clarinet, live electronics; and Markus Markowski: prepared guitar, laptop & software instruments) and three other musicians: Piero SK (saxophones, metal clarinet), Robert Rehnig (laptop & software instruments), and Johannes Sienknecht (laptop & software instruments). The result is spectacular. At times, it’s spectacular simply because it’s exactly what such a teaming, what such a confluence, should sound like: hi-hats against droning synth tones, lightly brushed guitar chords against sharp textures, mouthy woodwind vibrations that seem to bleed into light static.

That’s the core of “1000 Bones” (MP3), the second cut on the album that resulted from this collaboration (released by the netlabel restingbell.net). Despite the large number of players, it rarely sounds like more than two or three people are going at it at any given time, except perhaps in the densest, most roiling moments of “Randeisen” (MP3). The sound is almost aways hushed, but not reverential, chaotic, but at the lowest imaginable simmer.

The real highlights are when that simmer leads to evaporation, as on the vapor trail that is “Stromamt & Neige Improbable” (MP3), all glottal sax and cymbals that act like drone machines, and the opening track, “Luftfurche” (MP3), which somehow manages to be insectoid and elegiac, jittery and mournful, at once.

Get the full release, which includes two tracks in addition to the four featured here, at restingbell.net.