Images of the Week: From iPod to iPad

There is so much iPad coverage right now, it’s hard to say where to start, yet it would be incongruous not to note the object on the weekend of its release. Some of the best music-related coverage has been from createdigitalmusic.com, which is informedly skeptical but can talk with enthusiasm about apps such as RjDj and with curiosity about the role of the increased screen real estate (more on that in a moment), and the-palm-sound.blogspot.com, which has been characteristically encyclopedic in its coverage of various music-related apps.

I’ve yet to hold an iPad, and will soon (not today, but once the crowds dissipate) make my way over to the Apple Store, or the nearer Best Buy, to check it out. (For the record, its strict DRM system and the absence of true multitasking, not to mention the fact than any 1st-gen Apple device is likely to be improved upon relatively quickly, should it prove to be successful in the marketplace, means I will likely not be an early adopter.) One thing I’m paying attention to in particular is how the expanded screen size is adapted to by developers. Here are two images of Sonorasaurus, one of the better DJing apps, originally made for the iPod Touch and iPhone (below) and now available on the iPad (above): 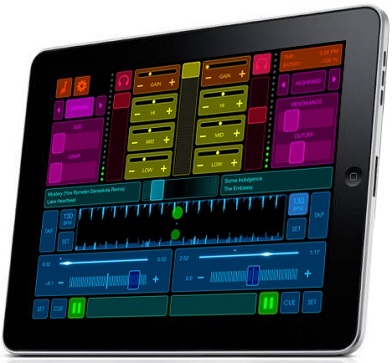 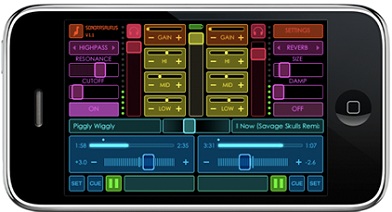 The relative size of the images doesn’t do justice to the amount of space available for developers to play with on the iPad, as compared with the iPhone/Touch. But sometimes more is too much. One thing that’s made the iPhone/Touch such an enticing tool and toy for users is the relatively high quality of the apps developed for it. The small size of the device combined with its excellent touchscreen quickly led to a mutually appreciated sense of design standards shared by numerous app developers — interfaces have, by and large, been elegant, uncluttered, intuitive.

With the larger space, there is now room for navigation aids, for multiple windows, and for divergent styles. The latter isn’t of concern — the more the merrier — but the elegance that is inherent in so many iPod apps may prove to be in shorter supply on the iPad, and what ramifications that might have for users will be interesting to gauge.

Sonorasaurus has started off conservatively, bumping up the size of the original app, which will be a welcome development for anyone who has tried to manipulate its tiny controllers. It also adds waveform visualization (which shows BPM as spikes in the audio), along the lines of the Touch DJ app.