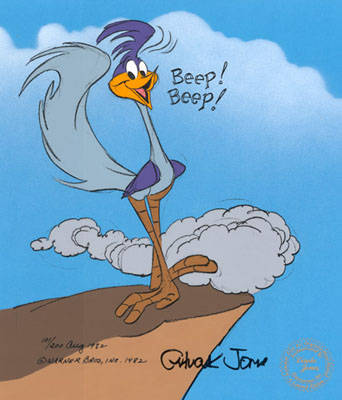 A brief letter in the New York Times this morning tackles two recent popular subjects at once: (1) the characterization of the “beep” as a quintessentially human-constructed sound and (2) the proper onomatopoeia for what the Road Runner says in the classic Warner Bros. cartoons:

While the real roadrunner doesn’t beep like its cartoon counterpart, contrary to Virginia Heffernan’s column (“Beep!”), there is an animal that beeps: the human. Since the inception of the Warner Brothers Road Runner more than 60 years ago, its “beep beep”(some think it’s “meep meep”) has been supplied by human voices, the Looney Tunes artist Paul Julian’s being the first. BILL STOLLER Pleasantville, N.Y.

Stoller’s letter, while fully correct, shows Heffernan to still be half-correct. Her original point wasn’t solely that the “beep” sound is constructed by humans (the implication being that it is machine-made), but that it bears the intrinsic mark of human-made-ness. The latter point remains factually accurate even if the Road Runner’s trademark sound is recorded by a guy with a microphone and a copyrighted audio style manual in a studio somewhere in Hollywood.

The correction makes me wonder about animal sounds in general. I try to keep an eye on developments in bioacoustics, and am wondering if there’s evidence of animals that employ objects as tools to make sounds — for example, whether the woodpecker’s pecking (which requires a solid object) has a meaning between woodpeckers, or between woodpeckers and the animals that treat them as prey.

As for “meep” vs “beep,” I’ve always figured that “meep” sounds less aggressive than “beep,” which is why it seems, to many people, to be more tonally accurate.