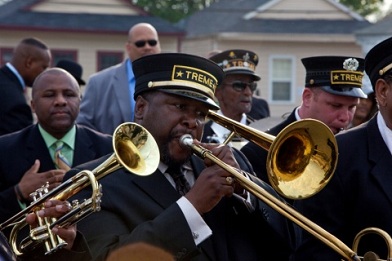 In August, it’ll be seven years since I left New Orleans; it’ll also mark the fifth anniversary of Hurricane Katrina, and the governmental incompetence exposed in its wake. Was reminiscing about the city tonight, when I caught the premiere episode of Treme, the new HBO series from the creators of The Wire. Learning that it was to be focused on the music of New Orleans raised some concern, since the first season of The Wire was peculiarly tone deaf when it came to the sounds of Baltimore, the city in which it was set. No such issues, as it turns out, with Treme, which mixes in not only old-school jazz and r&b, but also touches of the rap and swaggering rock’n’roll that make a home in the city. Here are some place-specific sound memories that surfaced while watching episode number one, “Do You Know What It Means”:

”¢ The DJ character played by comedian Steve Zahn is enamored of New Orleans music, and has the big ears to prove it. On his radio show, he doesn’t suffer the standards, playing a tangential cut by Louis Prima and cursing the pledge drive that requires him to slot in the chestnuts that signify New Orleans to outsiders, and that fill the station’s compilation CD. At home, he blasts Mystikal‘s “Shake Ya Ass.” I bought that very same 12″ in the early summer of 2000, almost exactly a decade ago, at a small record shop up the street from the post office where I kept a box. The production by the Neptunes, with its super spare beat, was the soundtrack of my entry into New Orleans. There may not be a song I played more often during my four years there, though I tended to stick to the instrumental cut. (The episode also featured a second Mystikal track, and one from Juvenile.)

”¢ Speaking of radio, I hadn’t thought of this in a long time, but for a while in New Orleans, I volunteered at WRBH, a station for the sight-impaired; the staff read all day long, starting with the current issue of the Times-Picayune newspaper, and then proceeding through magazine excerpts and novels.

”¢ One more regarding Zahn’s character — he mentions “Cosimo” at one point to a fellow DJ. He’s talking about Cosimo Matassa, the legendary record producer of Little Richard and others, and whose old studio, on Rampart Street just outside the French Quarter, had become a laundromat by the time I made it to New Orleans.

”¢ The closed-down Tower Records, where Zahn goes to retrieve some albums he had on commission: I was writing and editing for Tower’s Pulse! magazine when it shut down after 19 years of publication. I wrote the last cover story (on Missy Elliott), and learned via cellphone of the magazine’s imminent closing as the issue was going to press. I was walking down Magazine Street at the time.

”¢ The one sound in the episode I didn’t recognize was that of helicopters, which like the images of the National Guard standing along New Orleans streets, entirely post-dated my stay in the city.

”¢ And, finally, the episode — which is to say, the series — opens with a second-line parade, and there’s a brief moment when a police siren blurts along with the rhythm of the passing jazz band. That’s a not unfamiliar sound from second lines. Motorcycle cops toot their horns on occasion, the hard siren just another bit of counterpoint amid the ruckus.

Here’s a piece I wrote, reflecting on my time in New Orleans, shortly after Katrina hit: “NOLA-tronic.”