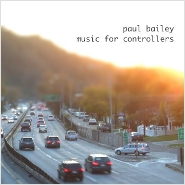 Familiarity may not always breed contempt, but it does breed familiarity. Those ambiguous, free-associative, light-noise sounds that the Buddha Machine emits were, for some time, exemplary background music. The soft loops of esoteric audio were just odd enough to be interesting, and just generic enough to not be distracting. But in time, as the machines proliferated — a sound-art object that’s become a cottage industry — the sounds themselves have become as familiar as commercial jingles. That isn’t anyone’s fault. When the duo FM3 first thought of creating the Buddha Machine, they had no reason to foresee that their small plastic box that endlessly (well, until the batteries dies) plays short bits of ambient sound would attract the sort of attention it has — praised by Brian Eno, the subject of major media coverage, followed up with a sequel.

Probably the sole development that wasn’t a surprise, pleasant or otherwise, was that other musicians would use the Buddha Machine as a tool of self-expression. Among the latest is Paul Bailey, whose recent Music for Controllers album includes several tracks featuring the Buddha Machine (in this case, the Buddha Machine app for the iPhone and iPod Touch). The opening tones on the album’s opening track are familiar, their patient looping like waves brushing up against the shore, albeit in slow motion (MP3). But that’s just the start. Then comes a pitter-patter like some children’s wind-up toy acting up, and a tentative bit of melody that slowly, ever so slowly, over the course of nine minutes, finds a common sensibility with the looping tones, and insinuates its own drone-like hymn. In the process, Bailey manages to do what many Buddha Machine adopters have not, which is to once again relegate the machine to the background.

Get the full set of five tracks at archive.org. More on Bailey at paulbailey.us.