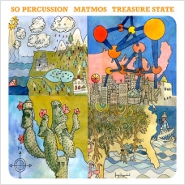 Teaming up So Percussion and Matmos is a match made in contrapuntal heaven. The percussion quartet has made a career of recording and performing demanding contemporary music, including a highly regarded album of work by Steve Reich, and the duo Matmos has been eliciting unusual sounds from the familiar yet peculiar (famously including rodents and plastic surgery) since the late 1990s. On a forthcoming album, due out July 13, titled Treasure State, they’ve become a formidable exotica sextet, judging by the advance taste provided by the track “Treasure” (MP3).

Midway through, it breaks into a solo that sounds like Adrian Belew — or, looking back a little further, Frank Zappa — at his most squelchy. But before and after the warped squall it’s a delicate, almost frivolous mix of chattering acoustic beats, mumbled drumming, and slow throbs.

When bands like Tortoise ushered the word “post-rock” and the concept of rhythmically complex, melodically sublimated, compositionally astute chamber music into our consciousness, the idea seemed to be that rock bands would slowly move in this direction. But So Percussion’s experiments with Matmos here are firm evidence that — at the risk of my extending a dualism while celebrating its disappearance — classical ensembles are challenging themselves as well, to the great reward of listeners.

The recording of Treasure State also featured editing by Wobbly and overdubbing by Lawson White. More information at cantaloupemusic.com.

More on Matmos at myspace.com/matmos1 and brainwashed.com/matmos, though both are a little out of date. More on So Percussion at sopercussion.com.