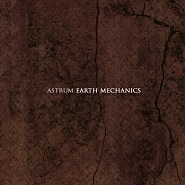 Astrum‘s recent release on the Rain netlabel takes a quote from the Haruki Murakami novel Kafka on the Shore as its epigraph: “The pure present is an ungraspable advance of the past devouring the future. In truth, all sensation is already memory.” That could be the mantra of a sample-based musician, in that it so explodes — as in expand, not destroy — the idea of memory that it gives lie to the whole concept of past and present, sample and sampler. If there is source material to the eight tracks on Astrum’s record, which is titled Earth Mechanics, it isn’t identified, but the molasses pace is applied to sounds ethereal (the woozy, attenuated “Tenebra”: Ogg), orchestral (the synth strings of “Artery”: Ogg), and earth-bound (the heavy, dark tones of “Metal-Hydrid Core”: Ogg). The latter track, at nearly 30 minutes, is the by far the album’s most extended, though all of them have a single-mindedness that’s compelling. In general, they have the intensity of a doom metal band, albeit at quarter speed.

Get the full release of Earth Mechanics at rainnetlabel.blogspot.com. Note that the files are only available in the Ogg (not MP3) format, hence the lack of streaming on this page (or at the archive.org page where it is housed).

One thought on “Death Metal at Quarter Speed (MP3s)”