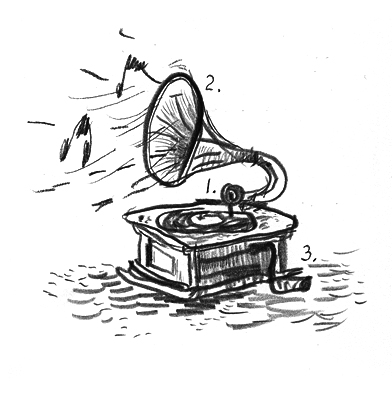 This is the second occurrence of a new little project: inviting illustrators to sketch something sound-related. I’ll post the drawing as the background of my Twitter account, twitter.com/disquiet, and talk a bit about the illustrator back on Disquiet.com. Call it “curating Twitter.”

The above drawing was done for me by Warren Craghead III, an artist and curator who makes pictographic, nonlinear stories that can be encountered everywhere: a sticker on a pole, a booklet in a newspaper, a postcard in the mail, an image on a website, a collage in a gallery. He is constantly drawing and is increasingly obsessed with field recording and phonography.

He was one of the creators whose work I edited during my 10-year stint overseeing the comics at Pulse! magazine (full list: disquiet.com), where he also drew a phonograph.

(Last month’s entry was by Brian Biggs, and it ran from April 20 through May 17: disquiet.com.)