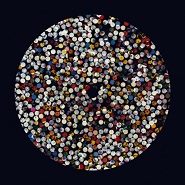 The title character in Four Tet‘s song “Angel Echoes” is the female voice, a snippet of which ekes out one sentence, more like a half-mumbled clause, that slowly repeats with what amounts to ethereal insistence for the track’s full length. It echoes, as the title suggests, with slight variants as time passes, each appearance sliding in behind the main voice like so many cards in a deck, always the same voice, less a chorus than a figment in a hall of mirrors. The track opened the recent Four Tet album, which arrived with the blissfully naive title There Is Love in You, and it manages to approximate with cloudy gestures what the musician (born Kieran Hebden) more frequently has accomplished with dastardly percussion: a shifting field that has a club-friendly downbeat yet endlessly flirts with abstraction.

For a recent 12″ release, Hebden tapped Canadian beatsmith Caribou for a remix, and then posted it online at soundcloud.com/four-tet. Caribou has muddied the angel, and the track is all the more memorable for it:

The 12″ also includes a Jon Hopkins remix. More on Four Tet at fourtet.net, and on Caribou (born Daniel Victor Snaith) at caribou.fm.