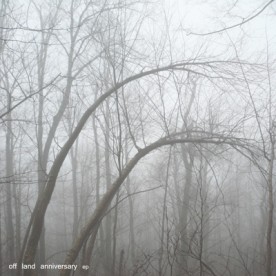 Some brides- and grooms-to-be pass out cheap cameras at their weddings, as a means to collect casual, nonprofessional, candid documentation of the momentous event. Tim Dwyer (who goes by Off Land) recorded his with a microphone — not just the ceremony but, as he puts it in the liner note to his album Anniversary, “pre-ceremony unpacking / chatter / music, post-ceremony celebration / music, and a hike up a mountain.” Dwyer later took those raw materials and formed a seven-track release of treated field recordings. Thus the water from the hike, likely, surfaces in “Streams” (MP3), though on many of the cuts the sounds have been transformed into something more textural than recognizable, such as the bell-like tones and fire-crackle static of “Ascent” (MP3).