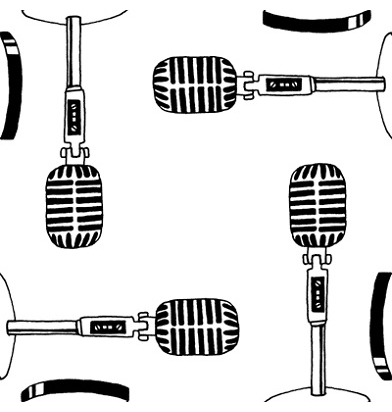 This is the third occurrence of a new little project: inviting illustrators to sketch something sound-related. I’ll post the drawing as the background of my Twitter account, twitter.com/disquiet, and talk a bit about the illustrator back on Disquiet.com. Call it “curating Twitter.”

The above drawing was done for me by Minty Lewis, who has been creating comics since 2002. Her characters are mostly fruit, yorkies, jerks, and nerds. She won an Ignatz Award for “Most Outstanding Minicomic” in 2007 and a collection of her work, titled PS Comics, was published by Secret Acres in 2009. She lives in Berkeley, California, with her husband and an army of small pets.

Lewis joined the manga magazine Shonen Jump as lead designer when I was editor-in-chief on it. I was honored to be depicted by her in a story in issue number three of PS Comics. It was loosely about a Chinese restaurant with a frighteningly negative health-department assessment, located across the street from the offices of Viz Media, publisher of Shonen Jump.

Find out more about Lewis and her comics at pscomics.com.