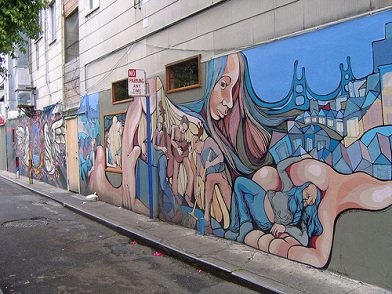 That’s not how the rules are supposed to work, right? If you’re combining natural sounds and electronic ones, there’s an inherent contrast, the noisy chaos of the “real” world set alongisde the considered organization of the “constructed” one. The real world is the one outside our doors. The constructed one is the one inside our minds.

Yet treehouses, which is to say Mike Rotondo, ingeniously — and, perhaps of more important, both tunefully and delectably — messes with such categories on “Goodbye Mission Dub,” a track he uploaded earlier this week to his soundcloud.com/treehouses account.

The track opens with street noise, and soon we’re faced with a handful of elements. First there’s an off-kilter rhythm that sounds automated but has a purposefully sloppy, slightly-off-the-beat thing going for it. Then there’s a woodwind, winding its way in and out of the rhythm. And finally there’s clanging percussion, what may very well be pots and pans.

The latter component seems to inherit the spirit of those field recordings, which come and go in the mix — they sound like happenstance, but they’re thoroughly functional, no less a part of the “music” (in contrast with the field-recording audio document of “real life”) than is the woodwind. And that semi-mechanized beat, with its odd metrics, is less dependable, less sturdy, than any of the other parts of the piece.

The song’s slow beat matches the San Francisco neighborhood of its title, and the dub is much more a matter of spirit than of what’s traditionally thought of as dub. There’s no heavy delay, no dank cavernous echoes. “Goodbye Mission Dub” situates itself as living-room music (or, given those pots, maybe kitchen music), a social space halfway between the outside world and the interior one. You’ll want to put it on loop and play it all afternoon.

(Photo of Mission District mural by Wendy Harman via flickr.com.)